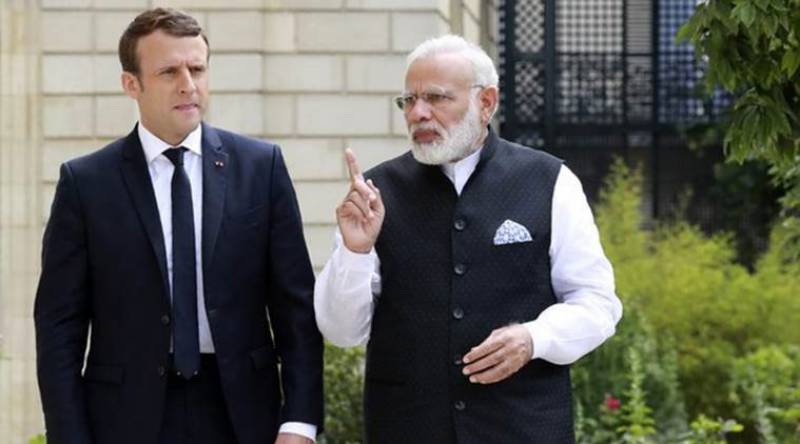 NEW DELHI - Can France replace Russia as India’s most valuable international partner? For many, this is an outlandish idea. For them, Russia’s place in India’s international relations is unique and unchanging. Some would dismiss the proposition by affirming that the United States has already replaced Russia as India’s privileged partner since the end of the Cold War.

Dig a little deeper, though, and you will discover why France has begun to loom so large in India’s geopolitical calculus. A peep into that future might be visible this weekend when the visiting French President, Emmanuel Macron, sits down with Prime Minister Narendra Modi <link>. They already have some interesting things in store. For example, the two leaders are expected to lay out a vision for bilateral strategic coordination for the Indian Ocean and back it with measures to facilitate operational cooperation between their security forces in the littoral.

These steps are welcome and overdue. But they are just the beginning. Modi and Macron are well-placed to turn India and France into long-term partners in shaping the geopolitics of Eurasia and the Indo-Pacific. But first to our claim that France could be “India’s new Russia”. It begs the question: Why has Russia won India’s political affections for so long?

After India gained independence, it was by no means inevitable that Soviet Russia would become a lasting partner for India. It was Russia’s repeated exercise of the veto to trump the Anglo-American tilt towards Pakistan on the Kashmir dispute that laid the foundation for Delhi’s enduring faith in Moscow.

It is not that the UN or anyone else can take Kashmir away from an India that is so much stronger than in the 1950s. But it is good to have a reliable friend in the UNSC who can block unfriendly moves by other powers. France, like Russia, is a permanent member of the UNSC and has a veto.

Until recently, it was Russia alone that made an unambiguous choice between India and Pakistan in favour of the former. As Russia reaches out to Pakistan, that special position now belongs to France. For example, Paris has foregone the opportunity to sell major weapons systems to Pakistan and has focused on a strong defence partnership with India.

Delhi’s new strategic appreciation of the French connection is also rooted in India’s recent nuclear history. Twenty years ago, when he came to India to announce the strategic partnership, President Jacques Chirac argued that India’s exclusion from the global nuclear order was unacceptable and must be corrected. That was in January 1998, a few months before India conducted its nuclear tests.

Although it was the US that did all the political heavylifting to generate the international consensus in favour of the nuclear reconciliation with India, Paris does get some credit for thinking through the raison d’être for the nuclear deal. If the Clinton Administration began to erect international sanctions against India immediately after the May 1998 nuclear tests, Yeltsin’s Russia wavered in its support to Delhi. But France did not. Paris did do much to temper the collective great power response to Pokhran II.

But what about India’s extraordinary military relationship with Russia developed over the decades? When Prime Minister Indira Gandhi <link> decided to diversify India’s defence ties in the early 1980s, she turned to Paris. Since then India’s defence relationship with France has steadily grown; but it is yet to reach the full potential. If and when India goes beyond the accountant’s approach to defence modernisation, the natural synergy between France’s strategic capability and the size of the Indian market would come into play.

India’s decision to buy the Mig-21 aircraft in 1961 was a political one forced down the throat of a reluctant defence establishment by Pandit Nehru. Today, with a similar commitment, Modi could begin the construction of a genuine defence industrial base in India in partnership with France.

But can France give India the special strategic assistance of the kind that Russia has delivered? Consider, for example, the Indian lease of Russian nuclear attack submarines and Moscow’s cooperation in the development of an indigenous line. France, too, builds nuclear submarines and it should not be impossible to imagine cooperation between Delhi and Paris on military nuclear propulsion and other sensitive areas.

But these types of decisions are not merely industrial or financial. They come out of shared interests and goals. What bound Russia and India together was the need to construct a regional balance of power system in Southern Asia during the second half of the 20th century.

In the changed context of the 21st, India and France have many reasons to draw closer. The prospects of even limited American retrenchment, the rise of China and its power projection into regions as far away as the South Pacific, Africa and the Mediterranean, the tightening embrace between Moscow and Beijing, the breakdown of the detente between Russia and Europe, and the turbulence in the spaces between India and France demand that Delhi and Paris pool their resources and act together.

Like with Russia and the US, India’s relationship with France can’t just be bilateral. Much in the manner that Moscow and Washington brought their other partners into their engagement with India, Paris opens the door for stronger strategic ties between India and Europe as a whole. The unfolding maritime cooperation, joint efforts to counter terrorism, and the building of the solar alliance, underline the emerging globalisation of the India-France partnership and eventually that between Delhi and Brussels.

An alliance with Paris, in pursuit of stability and security in Eurasia and the Indo-Pacific, does not mean Delhi abandons its engagement with Moscow and devalues its strategic partnership with Washington. A recalibration of India’s ties with Russia has been unfolding, slowly but surely, since the end of the Cold War. The US, on its part, can only be pleased that India and France are ready to take larger responsibilities and share the burden for maintaining regional and global order. - The Indian Express