BIRMINGHAM – England bowlers kept attacking the Australian batsman and reduced the score to 277 after fiery bowling in the death overs during ICC Champions Trophy 2017 encounter.

Aaron Finch fell for 68 runs of 64 balls to Ben Stokes who picked his only wicket by giving away 61 runs in the 8 overs. Travis Head top-scored with unbeaten 71 to his name of 64 balls, being the only batsman to score at rapid pace during the conclusion of first innings.

Over a dozen terrorists killed in IBOs across Pakistan

Australia were put into bat by England after winning the toss. Mark Wood and Adil Rashid picked up four wickets each to dismantle the Aussies’ batting lineup. Steven Smith also scored a half-century and contributed with Finch in the 96-run stand. 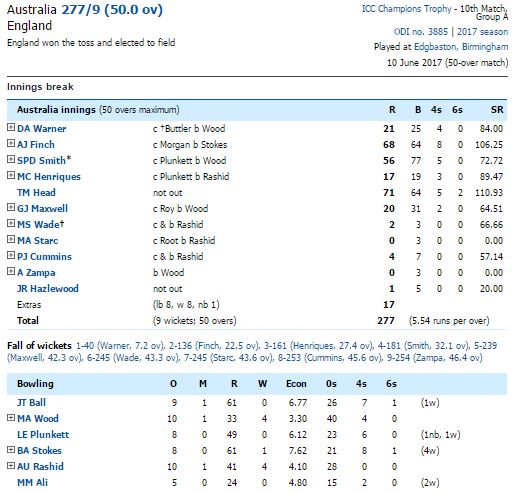