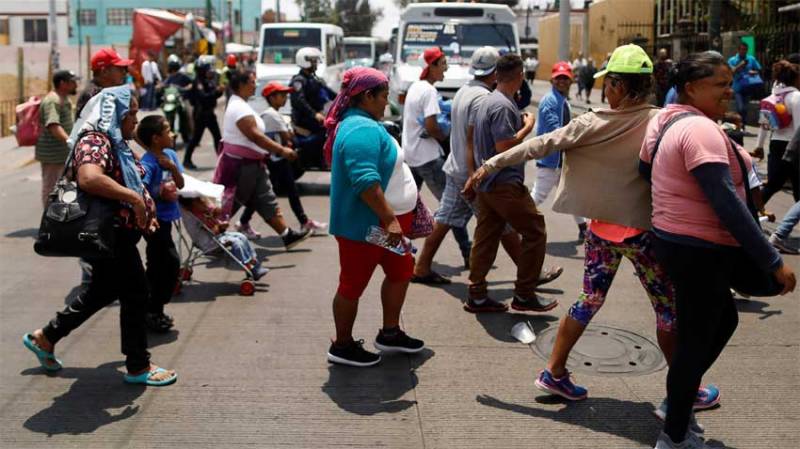 MEXICO CITY: At least 200 Central American migrants in a “caravan” traveling through Mexico that provoked the ire of U.S. President Donald Trump plan to seek asylum in the United States, organizers said.

After arriving in Mexico City, hundreds of migrants poured into the Basilica of Guadalupe, a Roman Catholic shrine, to give thanks, collect themselves or unleash emotions coiled tight during their long journey together from the southern border.

The number looking to claim U.S. asylum was more than double what organizers had anticipated, said Rodrigo Abeja, a coordinator from Pueblo Sin Fronteras, a transnational organization that staged the caravan.

For many, the arduous trek to the capital began days or weeks before, each hinging on a personal decision to flee conditions too difficult to bear in El Salvador, Guatemala or Honduras.

Barely across the cathedral’s threshold, dozens fell to their knees, heads bowing or eyes glistening as they gazed across the vaulted expanse and strained to hear a priest leading them in prayer.

Honduran Misael George beamed, grateful to have made it this far, and said that after the service he would meet with the other migrants who wanted to seek asylum in the United States.

With his three children and his wife, he went on the run from Honduras after a close relative was killed by a gang, and the threat spread to his family, he said. But with no proof on paper, he knew his odds for claiming asylum were long.

“Difficult, yes,” he said. “But not impossible.”

Trump last week lashed out at the caravan, accusing Mexico of failing to stop illegal immigrants headed to the border.

Manuel de Jesus Rodas, 27, from Honduras, daubed his tears with a tissue but could not staunch the emotion that choked his voice. His mother had just told him to come home, he said, because she was sick and in pain.

Now he waited for guidance about whether to go home - or go on. “I don’t know, but I think I have to follow my route,” he said.

Others in the caravan said they would stay in Mexico. APP/AFP