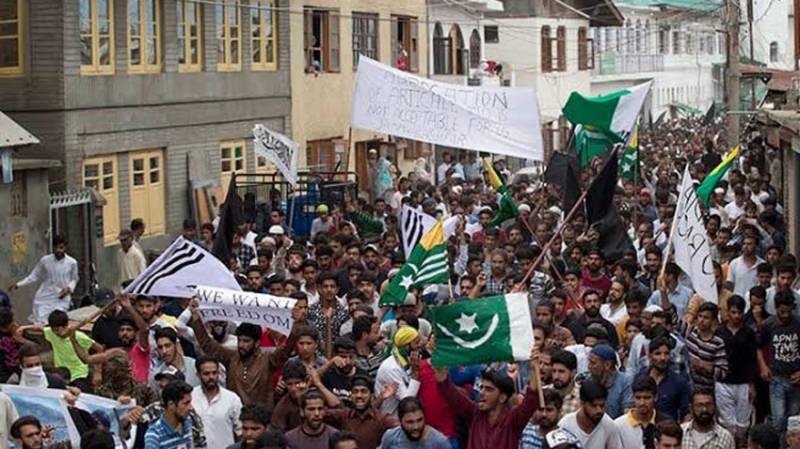 They raised high-pitched pro-freedom, pro-Pakistan and anti-India slogans. At many places, the protesters were subjected to brute force by Indian police and troops. Many demonstrators sustained injuries in brutal actions of forces’ personnel.

Meanwhile, fear and uncertainty continued to grip the Kashmir Valley and Muslim majority areas of Jammu and Ladakh regions as the military lockdown imposed by India continued on 96th running day, today.

People in the Valley continue to keep their shutters down and stay away from schools and offices as part of a civil disobedience movement against Indian occupation.

Shops open briefly in the morning and evening hours but even this window is more often than not disrupted due to the continuing uncertainty. Prepaid phone, SMS and internet services remain snapped.

Addressing a meeting in Kishtwar, Chairman of Jammu and Kashmir Anjuman Seerat Committee, Kishtwar, Maulana Abdul Qayoom said Kashmiris would not forget sacrifices rendered by people of Jammu in the ongoing freedom struggle.

He paid glowing tributes to hundreds of thousands of Jammu martyrs who were massacred by forces of Maharaja Hari Singh, Indian Army and Hindu extremists in different parts of Jammu region while they were migrating to Pakistan during the first week of November 1947.