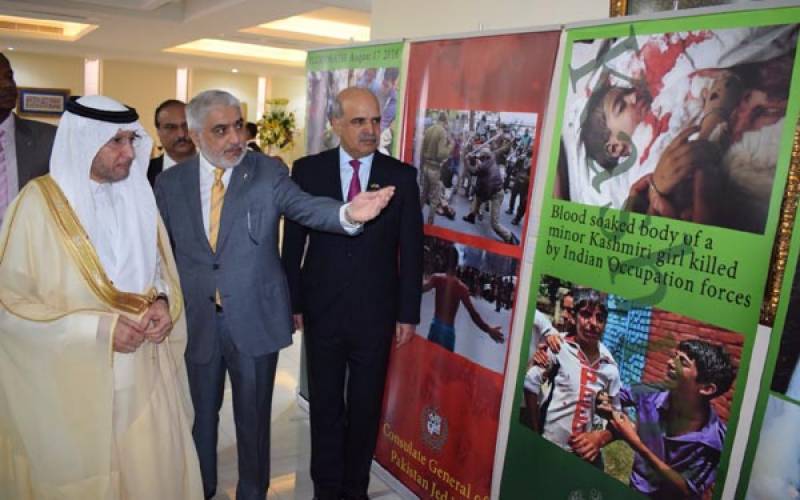 ISLAMABAD - Dr Yousaf Bin Ahmed Al-Othaimeen, the OIC Secretary General, reiterated OIC’s full support to the people of Kashmir in their legitimate struggle for the fundamental right to self-determination.

He said this at a seminar and Photo Exhibition on Kashmir jointly organized Thursday at the OIC Secretariat in Jeddah in collaboration with the Pakistan Consulate. The Secretary General called on the Indian Government to stop using force against the Kashmiri people.

According to a report received from APP scribe here from Jeddah, in his welcoming remarks, Consul General Shehryar Akbar Khan said that the event was organized to mark the illegal entry of Indian forces into occupied Jammu and Kashmir in 1947. He urged the international community to support the people of Kashmir in their legitimate struggle against Indian occupation.

Syed Faiz Naqashbandi, True Representative of Kashmiri People, briefed the audience about prevailing situation and continued human rights violations in the Indian Occupied Kashmir. He called on international community and the OIC in particular to play its role so that Kashmiri people can exercise their inherent right to self-determination.

In his concluding remarks, Khan Hasham bin Saddique, Ambassador of Pakistan to the Kingdom of Saudi Arabia thanked the OIC and Saudi Arabia for supporting the cause of the people of Kashmir.

He highlighted the plight of the people of Kashmir under Indian occupation and urged the international community to persuade India to end human rights violations. He said that the Government of Pakistan will continue to extend all moral, political and diplomatic support to the Kashmiri people in their historic struggle.

Members of the Kashmir Committee Jeddah presented a resolution, calling OIC to redouble its efforts to resolve the Kashmir issue.

The photo exhibition and seminar on Indian occupied Kashmir at the OIC Secretariat has become an annual feature for the past five years. The event was well attended by high level OIC officials including Ambassador Abdullah Al-Alim, OIC’s Secretary General’s Special Representative on Jammu and Kashmir, Saudi officials, members of Diplomatic Corps, local dignitaries and representatives of Pakistan community.

The Consulate also organized other events to commemorate Kashmir Black Day this year. A meeting of Kashmir Committee Jeddah Chapter was also held at the Pakistan Consulate General on October 25. Another event is the gathering of members of the community, local Saudis and media at the residence of Consul General on November 9.