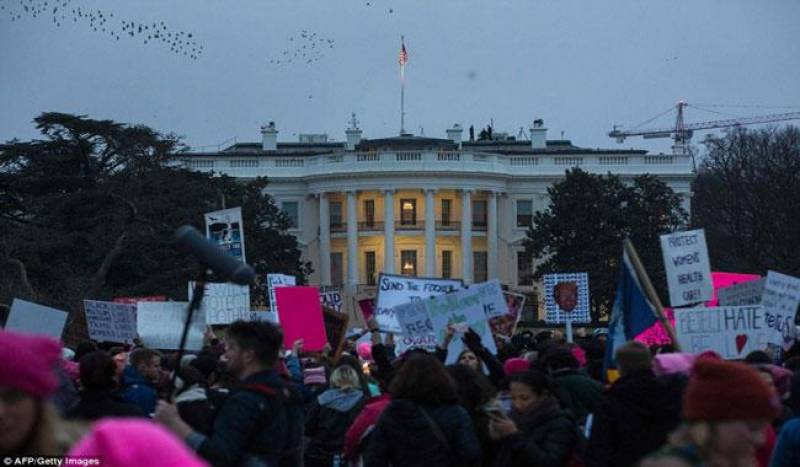 Many of the demonstrators carried signs decrying the reintroduction of a global "gag order" which prevents foreign charities from using US government funds to provide abortion services, information, counseling or referrals.

The crowd marched peacefully on an unusually warm and sunny day to Lafayette Park across from the White House, to chants of "Donald Trump has got to go!" and "This is what democracy looks like!"

Susanne Lowen, a 55 year-old baker clutching a sign that read "No gag on reproductive rights," decried the president´s plan to link foreign aid to a prohibition against disseminating information on birth control as "cruel and immoral."

Plenty of anger was also directed at other Trump administration policies.

Sheila Collins choked on her words when she tried to explain the many reasons she was protesting, ranging from Trump´s refusal to release his tax returns to controversial statements by cabinet officials like Jeff Sessions and Ben Carson.

"Every day I wake up thinking, ´this can´t be real,´" said Collins, a 40 year-old marketing director.

"They are doing things to undermine our democracy."

The Trump administration "is disrespectful to women and to the truth," said Collins. She carried a sign that read "Our Bodies, Our Lives, Our Vote."

As the crowd steamed into Lafayette Park, knots of demonstrators broke off and paused to take selfies with the White House as a backdrop.

Police officers dressed in black, several on bicycles, discreetly eyed the crowd from a distance.

For 20 year-old demonstrator Tess Thapalia, the main issue was what she described as "reproductive justice."

She stood for several minutes outside the White House holding high a sign that read: "Every mom willing, every child wanted."

Some government workers took time off to march with the crowd, but declined to speak to reporters.