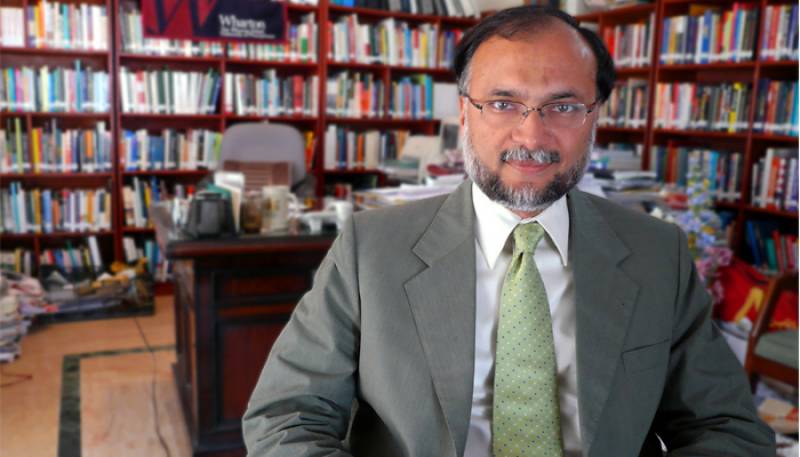 LAHORE: (APP) Federal minister for Planning and Development Prof Ahsan Iqbal has said that the government has set the goal to produce twenty thousand PhDs degree holders in the next ten years to enhance knowledge economy of the country.

Talking to the media person at the "6th Invention to Innovation Summit" at the Punjab University here on Wednesday, he said funds worth 86 billion rupees has been approved to train 10000 PhDs at the best US universities under the US-Pakistan Knowledge Corridor as well.

The Minister, responding to a query, said the government has taken many initiatives to enhance knowledge economy of the country, adding that the budget of the Higher Education Commission (HEC) has been increased from Rs 100 billion to Rs 215 billion.

To a question, Ahsan said the work has been started to set up university sub-campuses in all districts, adding that this initiative would provide best educational facilities to the students from FATA, GB, Baluchistan and this project will be completed within 3 years.

He said the government has also launched STEAM (Science, Technology, Engineering, Arts and Maths) initiative under which centers of excellence are being set up to strengthen these subjects in collaboration with the provincial governments and the HEC while funds have been allocated for this project as well.

"Information technology holds supreme importance in government's priorities, adding that the fiber optic, being imported under the CPEC, will prove to be the backbone of the country's digital infrastructure", he added.

About PSL, the federal minister said the foreign cricketers, irrespective of their cricketing stature, who played PSL final in Lahore and stood by us in the fight to defeat terrorism are our benefactors and heroes. He said nobody has the right to demean cricketers on racial basis or through the use of derogatory remarks.

To another question, he said PTI Chairman Imran Khan, who himself was a world-class fast bowler, should know that his comments on the PSL cricketers were not aligned with the aspirations of the nation. He said it is the basic flaw in Imran Khan's personality that he takes decisions within the shell of his ego and person while he fails to understand the mood of the nation.

“When Imran Khan held sit-ins, the nations was least interested in it; when he pressed for the Panama papers issue, the nation was more interested in the work of the government and revival of country’s economy; and when he opposed PSL, the nation aspired for the success of PSL”, he remarked.

Ahsan Iqbal, to another question, said Imran Khan was independent in his decision-making but he would definitely help PML-N win the two third majority in the National Assembly in the 2018 General election if he continued to take such silly decisions.

The Federal minister Ahsan Iqbal said the country is faced with extraordinary situation, adding that the military courts bill be adopted through consensus.

Earleir, the minister highlighted the government's efforts to strengthen the economy and wage a war gainst terrorism.