Pakistan has greater leverage over US than many imagine, Trump’s policy to backfire: Former US Ambassador Olson
9 Jan, 2018 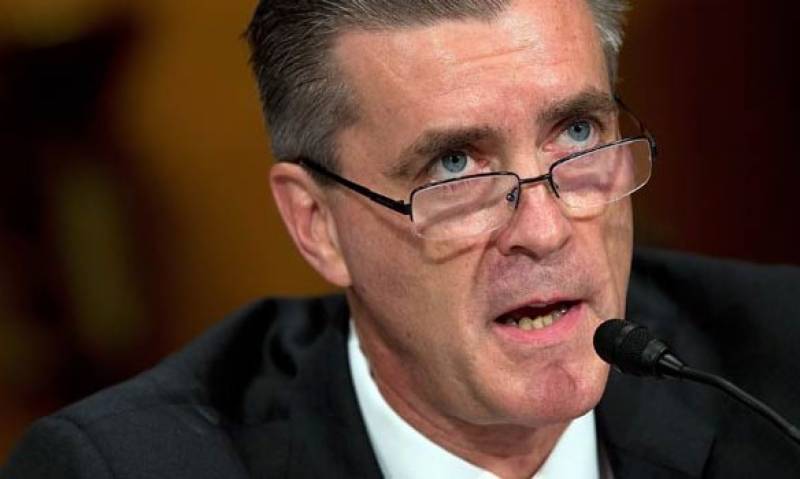 WASHINGTON: Former US ambassador to Islamabad Richard Olson has said that the Trump administration’s attempt at humiliating and penalizing Pakistan is unlikely to work, adding the South Asian nation has greater leverage over America than many imagine.

In an opinion piece for The New York Times <link>, Olson said that the harsh truth is that American leverage over Rawalpindi and Islamabad has been declining. And as United States aid levels have diminished — reflecting bipartisan unhappiness with Pakistani policy — aid from the Chinese has increased.

China has invested around $62 billion in Pakistani infrastructure under the China-Pakistan Economic Corridor, an element of the “One Belt, One Road” initiative. Its magnitude and its transformation of parts of Pakistan dwarf anything the United States has ever undertaken.

Thus, the Trump administration’s attempt at humiliating and penalizing Pakistan is unlikely to work. Pakistan, like most countries, reacts very badly to public attempts to force its hand. It is likely to respond by showing how it can truly undercut our position in Afghanistan.

He said that a better approach would be to privately convey, at the highest levels and without equivocation that the only way to preserve any relationship with the United States is to cut all ties with the Taliban, including the Haqqanis.

The Trump administration, with its hard-line reputation and willingness to reject all previous United States policy, could credibly deliver this message, he said. “But the path of the tweet and highly public aid cuts is not a method that will engender success. The United States can address Afghanistan only with a political initiative.”

Olson urged the Trump administration to start a diplomatic initiative to bring peace to war-torn Afghanistan by opening talks with the Taliban.

“The ultimate answer to the Pakistan conundrum is to start a diplomatic initiative to bring peace to Afghanistan by opening talks with the Taliban. Much of diplomacy is taking away the other side’s talking points, or excuses.”

The Trump administration has publicly stated that it sees the conflict ending only through a negotiated solution. It is difficult to understand why no such diplomatic initiative had been started.

Pakistan has greater leverage over US

While perhaps it is emotionally satisfying to penalize a country that has supported American enemies in Afghanistan for the past 16 years, the administration’s approach is unlikely to work. Pakistan has greater leverage over us than many imagine.

The keys to understanding Pakistan’s policy and the limitations of American options lie in geography and history. Pakistan essentially amounts to a relatively indefensible sliver astride the Indus River, with flat plains in the east and mountain redoubts populated by hostile tribes in the west. This fragile geography would not matter if not for Pakistan’s long history of enmity toward its far larger neighbor, India.

Since its founding in 1947, Pakistan has defined itself as a national security state in opposition to the Indian behemoth to its east. Pakistanis have long dreaded the prospect of Indian tanks from the adjoining plains of Indian Punjab rolling unimpeded into Lahore and beyond. We may not agree with how Pakistan assesses the threat from India, but in my experience, almost all Pakistanis perceive India as an existential threat.

US supported proxies against Soviets

During the 1980s, the United States found it convenient to support some of these proxies against the Soviets in Afghanistan. That policy ended in 1989 as the Soviet war in Afghanistan wound down. Under the 1990 Pressler Amendment, we punished Pakistan for development of nuclear weapons by cutting off security assistance.

But Pakistan, having these groups on its territory and a large Pashtun population of its own, never had an easy option of breaking with Afghan militants. And it has continued to allow the Taliban, including the Haqqani network — a group the United States supported during the Reagan era — to operate from its territory and at critical moments has provided quiet support.

The geography that defines Pakistan’s security worries has also been a bane for the United States. For the past 16 years our military efforts in landlocked Afghanistan have been dependent on transit through and especially overflight of Pakistani territory.

Absent an implausible similar arrangement with Iran, other options are not good. Supply through the Central Asian states to the north is theoretically possible, but would rely on Russian good will. Enough said. Without Pakistani cooperation, our army in Afghanistan risks becoming a beached whale.

The American solution has been a robust package of assistance to Pakistan, beginning with the Bush administration in 2001. The United States sought to reimburse Pakistan for the costs of supporting our war in Afghanistan. In the eyes of the Pakistanis, this became payment for their war against domestic terrorism, which has cost Pakistan 50,000 lives and untold billions, and was widely perceived as a bad deal.

Despite an infusion of about $1 billion per year of development assistance during the Obama administration, money never gave the United States the leverage it desired. The Pakistani generals who run Afghanistan policy from their headquarters in Rawalpindi were never convinced that they had to choose between their relationship with the United States and their relationship with the Taliban.

I can vouch from bitter personal experience that I hammered away at the need to make that choice for four years, but never got any purchase. The generals knew that as long as the United States maintained an army in Afghanistan, it was more dependent on Pakistan than Pakistan was on it. This disconnect between Washington and Rawalpindi led to the decline in United States-Pakistan relations that was already highly visible in the last year of the Obama administration.