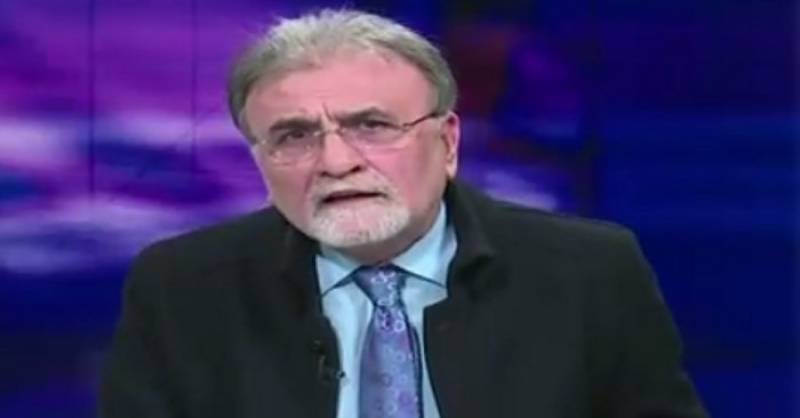 ISLAMABAD – Hours after accusing Prime Minister Imran Khan of planning the assassination, renowned Pakistani journalist Nusrat Javeed on Saturday felt regret over his remarks, which, he said, might have been uttered due to his paranoia.

Earlier today, Javeed on his Twitter handle claimed to have survived a ‘deadly attack’ in Islamabad while returning home, adding that the prime minister tried to get him killed.

However, the veteran journalist took to Twitter after few hours of his naked allegation and said that it was, according to the police investigation, a tyre burst occurred due to stones on the road.

After a thorough probe by the Islamabad police, it surfaced that tyre of the vehicle got burst after hitting by a stone and the car skidded, causing rest of damage, Javeed said.

He further wrote “I have to accept their professional opinion. Perhaps the post accident trauma made me paranoid and I suspected foul play for a definite history with the current government”.

Javeed also apologised over the false accusations against the prime minister, stating: “I render a sincere apology to people who must have felt deeply hurt for my paranoia”.

In the series of tweets, the journalists went on to say: “Police also believe that boys came around me perhaps wanted to help me but the post accident trauma and paranoia made me suspect otherwise. I have no choice but accept the Police version”.

He also thanked the members of the journalist community and others for extending the support during this trauma.

Earlier, Javeed, in a conversation with Naya Daur, said that he was driving to his home from G-8, Islamabad, when suddenly shots were fired at his car near the G-8 Imam Bargah.

“Both the tires on the left side of my car were burst and completely damaged. Then six men in plain clothes came and inspected me… The plan was to kill me”, he said in point-blank remarks.

“They must have thought that I’d be intoxicated and die in the accident but since I was sober, they left me alone,” Javeed added.

The senior TV anchor confirmed that he had reached home safely but said he hadn’t filed a report with the police.