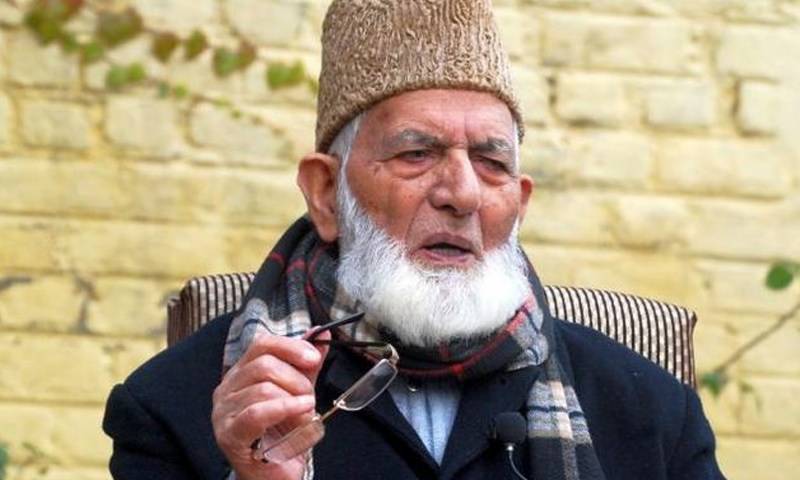 In occupied Kashmir, Chairman All Parties Hurriyat Conference Syed Ali Gilani, has said that India is harassing and intimidating his family to pressurizing him but these cowardly acts will yield nothing for New Delhi.

In a statement issued in Srinagar, he condemned the summoning of his second son, Dr Naeem Gilani by India’s National Investigating Agency.

Ali Gilani said that earlier his younger son, Dr Naseem Gilani was summoned by both NIA and Enforcement Directorate.

He made it clear that India would not be able to break his resolve through such tactics as he has willfully adopted the torturous and thorny path of pursuing the movement for fundamental rights of his people.

Meanwhile, complete shutdown was observed in Kangan and Ganderbal towns for the second consecutive day, today, to mourn the killing of a student, Rahil Rashid Sheikh, by Indian troops.

All shops and business establishments were closed while public transport was off the roads in several areas of Gandarbal district.

The Chairman of Hurriyat forum, Mirwaiz Umar Farooq also arrived in New Delhi to appear before the infamous India’s National Investigation Agency in connection with a fake case registered against him.

Meanwhile, the ruling Bharatiya Janata Party in its election manifesto released in New Delhi today said that the party is committed to abrogate the Articles 370 and 35A of the Indian constitution, which grant special status to Jammu and Kashmir.