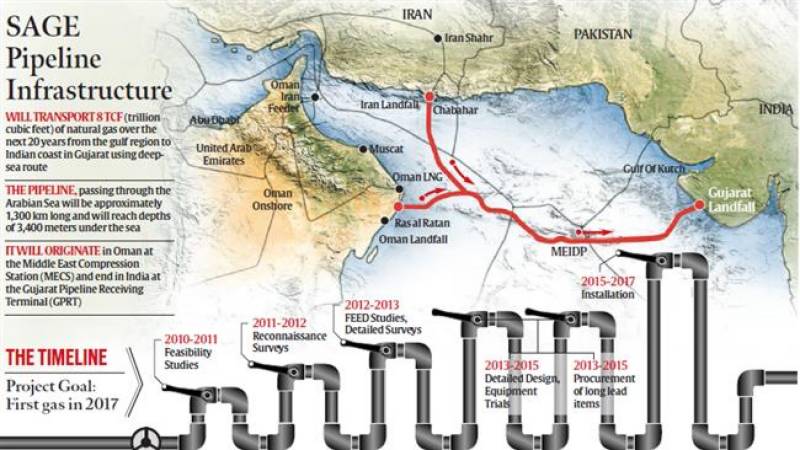 With a $7 billion project to pump gas from Iran discarded, a 1,300 km undersea pipeline is finding new proponents in India where they say natural gas from the Persian Gulf can reach at rates less than the price of LNG available in the spot market.

The Associated Chambers of Commerce of India (Assocham India) has released the results of its study on “a trans-national deep water gas pipeline from Iran, passing through Oman but by-passing Pakistan,” it said.

The project could help feedstock the country’s power, fertilizer and steel plants in an environment-friendly and affordable way and for sustainable supply of the fuel, it said.

“An undersea pipeline between Iran-Oman-India will connect the producers and consumers of gas directly. This will bypass all geopolitical issues. It will also lead to more gas-to-gas competition and creating a genuine gas hub, as in Europe/USA etc,” the study suggested.

Iran signed the undersea agreement in 2013 to supply gas to Oman in a deal valued at $60 billion over 25 years. In February this year, the two countries said they had agreed to change the pipeline’s route to avoid waters controlled by the United Arab Emirates.

The planned pipeline would connect Iran’s vast gas reserves with Omani consumers as well as with liquefied natural gas (LNG) plants in Oman that could re-export the gas.

India’s former oil secretary T.N.R. Rao, who released the study on Tuesday, said the Iranian pipeline in Oman can be extended to Porbandar in Gujarat.

Rao said natural gas imported through the line would cost $5-5.50 per million British thermal unit at the Indian coast compare with LNG imported through ships which costs about $7.50 per mmBtu.

“The cost of landed gas through an undersea pipeline will be at least $2 cheaper than importing LNG, saving about $1 billion annually,” the study said.

South Asia Gas Enterprise Pvt Ltd (SAGE), which is chaired by Rao on the company’s advisory board, has volunteered to lay the pipeline which would bypass the exclusive economic zone (EEZ) of Pakistan. It wants the government to support the pipeline and help buyers enter into contract.

The pipeline, estimated to cost over $4 billion, is planned to carry 31.5 million standard cubic meters of gas per day and would be built in two years.

Rao said gas from other nations can also be sourced through the pipeline, citing Turkmenistan which has a pipeline supplying gas to Iran in the north. Iran, he said, can use the Turkmen gas for its own use and supply and equivalent volumes to India from its offshore fields.

India is now the fourth largest natural gas importer, mainly from Qatar. The study said India must build a least one trans-national gas pipeline in the next five years for use in its idled power generation capacities, new fertilizer plants, steel mills and construction companies.

The undersea pipeline is being promoted as an alternative to the onland Iran-Pakistan-India pipeline, dubbed the “peace pipeline,” which New Delhi quit in 2009, a year after signing a nuclear deal with Washington.

The project has faced repeated delays since it was conceived in the 1990s to connect Iran’s giant South Pars gas field to the subcontinent.

On Tuesday, Minister of Petroleum Bijan Zangeneh said he thought Iran's gas would eventually be exported to Pakistan.