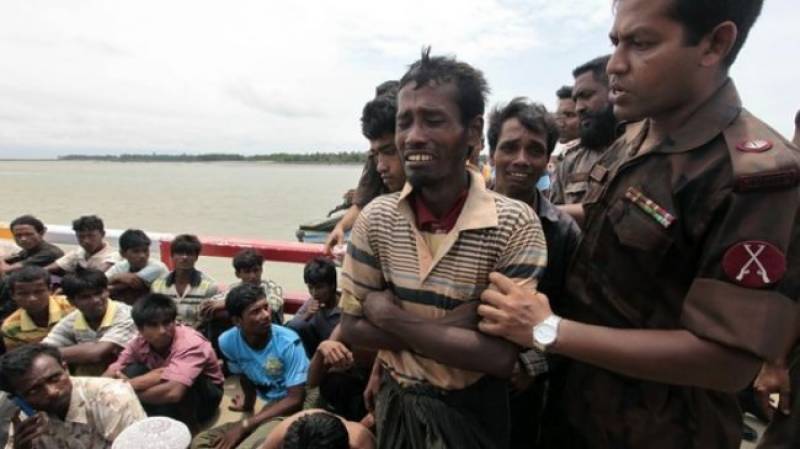 ISLAMABAD - It was the fast-flowing river that doomed the inhabitants of Tula Toli. Snaking around the remote village on three sides, the treacherous waters allowed Burmese soldiers to corner and hold people on the river’s sandy banks. Some were shot on the spot. Others drowned in the current as they tried to escape, says a report in foreign media.

Zahir Ahmed made a panicked dash for the opposite bank, where he hid in thick jungle and watched his family’s last moments. “I was right next to the water,” he recalled in an interview a week later at a refugee camp in neighbouring Bangladesh, his eyes bloodshot and his shirt stained with sweat and dirt.

Ahmed said teenagers and adults were shot with rifles, while babies and toddlers, including his youngest daughter, six-month-old Hasina, were thrown into the water. Ahmed cried as he described seeing his wife and children die, meticulously naming and counting them on both hands until he ran out of fingers.

During interviews with more than a dozen Rohingya from Tula Toli, the Guardian was told of what appeared to be devastating carnage as Myanmar’s armed forces swept through the village on 30 August and allegedly murdered scores of people. Those who escaped fled to the hills in the west to make the three-day trek to Myanmar’s border with Bangladesh. The rest were buried in a mass grave, villagers said.

Many of the interviews were conducted separately over two days, however, and the villagers confirmed details of each other’s statements without prompting. A United Nations report released this year detailed what happened to those that stayed. The report described mass killings and gang rapes by the armed forces in actions that “very likely” amounted to crimes against humanity.

The current wave of violence is the worst so far, and rights groups have said it could constitute a final campaign to rid Myanmar of the Rohingya. Satellites have recorded images of whole villages burnt to the ground.

The subsistence farmers of Tula Toli, who spent their lives growing rice and chillies, said there were no militants in their village when the army attacked. Khaled Hossein, 29, labourer: Three days before the massacre, Hossein said about 90 soldiers ordered the village’s several hundred residents to an area east of the settlement, a place locals call “the sands” for its infertile ground.

“Their leader had two stars on his shoulder. He told us: ‘Rumours are being spread around by people in the village that soldiers have been killing people in Rakhine. But you should all keep farming and fishing. The one thing we ask is that if you see soldiers, you don’t run away. If you run, we will shoot.’

“After the speech, the soldiers went from house to house. They were with [local Rakhine Buddhists] and took everything they could find that was valuable: gold, cash, clothes, potatoes and rice. They smashed up houses of three or four people they said had been spreading rumours. They were looking for fighters. The Buddhists had told them about fighters, but there were none there.”

Petam Ali, 30, rice distributor: A day before the attack, people from a village across the river called Dual Toli swam over to escape the army. More than 10 died in the river, according to Petam Ali, who sheltered some of the displaced in his family home. They watched their village burn from across the river. At 3.30am the next day, Ali heard shooting but was not sure of the direction.

“I live on the north side of the village and the army had crossed the river further north and were marching down. I left my family to run out to the jungle to try and spot the soldiers. We waited until 8am and then they moved in, wearing dark green clothes. All of them were on foot.

“I ran back to get my family, but we were too rushed and my grandmother was too old to run. From the forest, we watched them burn our house. It was the first in Tula Toli to be burned.”

“The soldiers used rocket-propelled grenades, and they set fire to the houses with matches. Once they had gone past, I went back. All the houses were burned. In the road, I saw a dead man I recognised called Abu Shama. He had been shot in the chest. He was 85.”

In the ruins of his house, Ali saw the singed and decapitated corpse of his grandmother. “Her name was Rukeya Banu. She was 75. When I returned to the jungle, I described the whole incident to the rest. They burst into tears. We walked for three days.”

Kabir Ahmed, 65, rice farmer: “When I heard the army attacking to the north, I jumped into the river,” said Kabir Ahmed. “My two sons came with me. They are 10 and 12.” Eight members of his family died, he said, and two of his other sons are unaccounted for.

“They threw the children into the river. My three-year-old granddaughter, Makarra, and Abul Fayez, my one-year-old grandson. I was hiding on the south side of the river. They gathered everyone together and told them to walk away. Then they shot them.

“We were on hills, hiding behind trees. In the evening, they collected all the bodies on the river bank, dug into the sands and burned them. It happened 40 metres away from me, on the other side of the river. They are buried two to three metres from the riverside.”

Zahir Ahmed, 55, rice farmer (Kabir’s brother): “When the army arrived, Kabir Ahmed’s brother, Zahir, was also down by the river but in another spot. His son ran out of their home out in a panic. “‘Leave us!’ he shouted. I jumped into the river and swam to the other side.

“I waited in the jungle, listening to the military firing. I was right next to the water. My son had gone to save other members of the family.” But he says all were killed.  He starts to count on his fingers those who died: “My wife, Rabia Begum, 50; my first son, Hamid Hassan, 35; his daughter, Nyema, two to three, and his son, Rashid, six to seven months; my second son, Nour Kamel, 12; my third son, Fayzul Kamel, 10; my fourth son, Ismail, seven; my eldest daughter, Safura 25; her husband, Azhir Hassan, 35; my second daughter, Sanzida, 14; my third daughter, Estafa, six; my fourth daughter, Shahina Begum, five; my sixth daughter, Nour Shomi, two to three; my seventh daughter, Hasina, six months old.

“I waited for five hours and then left.”

Mohammed Idriss, 35: “I had a bag filled with oil, sugar, flour, 10,000 kyat, rice – things I had taken from the house when we left. When we got to the Naf river [the Bangladesh border], the Myanmar army started shooting.

“I jumped into the river and then hid behind a sandbank. The soldier came and shot at the bag, opened it and took everything. Once we got to the Bangladesh border, the guards told us to head here.” He says he carried the bag for three days during the 10-mile trek through the trees and hills from Tula Toli.

At camp, Idriss gets a phone call to a dusty mobile, being charged by a cheap solar panel someone found in the market. On the line was another Rohingya refugee near the border. They had found a woman with a gunshot wound to her arm who matched the description of his missing sister. “They thought she might have been Rabia, but she wasn’t,” he said. “We’re not sure if she was killed or not. We are hoping.”