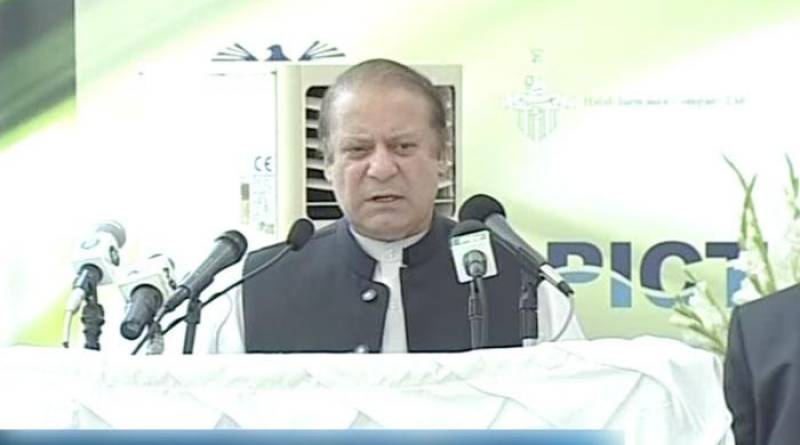 KARACHI (APP): Prime Minister Muhammad Nawaz Sharif on Thursday reiterated his government's commitment to progress and development of Pakistan at a fast pace and said the nation must question those who were trying to push the country back to ages of darkness.

He was addressing the awards distribution ceremony for the companies that showed outstanding performance here at the Pakistan Stock Exchange (PSX).

He said the Pakistan Stock Exchange has emerged among the top ten best performing stock exchanges in the world. He said when his government came into power. the stock exchange index was around 19,000 while now it has gone up to 41,000 points and reflects the robust economy of the country.

Prime Minister Nawaz Sharif said the government revenues had increased by 60 percent, while the foreign exchange reserves were at their highest level due to the government's successful economic policies.

He said international financial institutions had repeatedly pointed to the positive economic indicators, owing to the political and economic stability.

Nawaz Sharif said his government was committed to ridding the country of loadshedding by the year 2018 and said today the industrial units were getting electricity and natural gas.

He said efforts were afoot, not only to generate more electricity, but also to lower its tariffs so as to make its products more competitive in international markets.

The Prime Minister said country's exports need to be boosted and a number of measures were being taken in this regard.

He said Pakistan Railways needs to be upgraded urgently to facilitate the industrial and business consumers.

He said his government was working on a comprehensive plan to enhance country's air, road and rail network. He said special measures have been taken to revive the national flag carrier - Pakistan International Airlines, and to make it one of the best in the world.

The Prime Minister said work on Lahore Karachi motorway was going ahead at a fast pace, and announced that he would soon lay the foundation stone of the Hyderabad-Sukkur motorway soon.

He said work on other sections; Sukkur-Multan and Multan-Lahore was going ahead at a fast pace.

He said inter-connecting roads were being built across the country to help boost trade and business.

He recalled the nationalisation process in the '70s and said it set back the country's pace of progress. He said all these units managed to earn profits once they were privatised.

Earlier, Chairman Pakistan Stock Exchange Munir Kamal said it was Prime Minister Nawaz Sharif's second visit at the annual award ceremony in as many years and shows his commitment to this vital sector.

He attributed the credit of award of Emerging Market status, to Pakistan to the commitment and hard work of the present government and said there has been a major positive change in country's stock markets since the PML-N government came into power.

He termed establishment of PSX was a difficult task and said international financial institutions were acknowledging the country's robust economic growth and positive indicators.

He said the 12th review of the International Monetary Fund has successfully culminated and added the political stability has helped strengthen investors confidence.

He said the country has made great success against terrorism and said the CPEC would prove to be a game changer for the entire region.