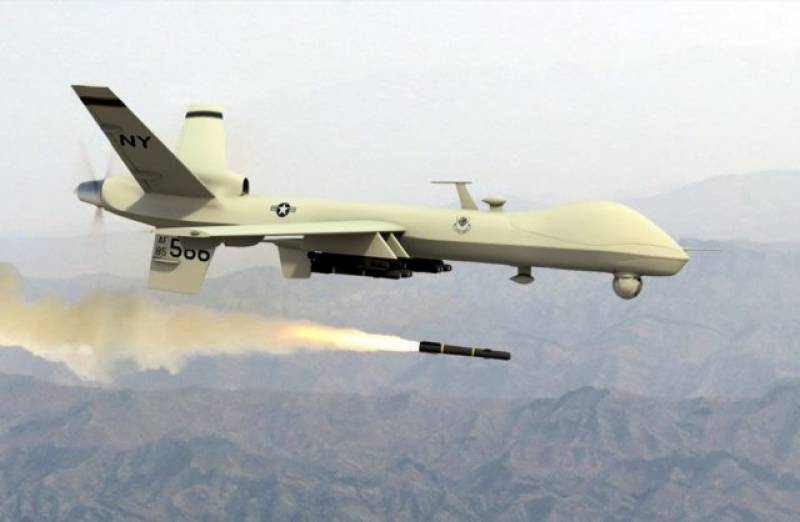 The strike, which the officials said took place on Wednesday, targeted a compound frequented by Mullah Fazlullah, the leader of the Pakistani Taliban who is believed to be hiding in Afghanistan.

The intelligence officials said Fazlullah was apparently not there at the time of the strike in Afghanistan's Kunar province, miles away from Pakistani border, but his son was killed.

The United States made no comment on the strike. There was also no immediate comment from NATO, Afghan authorities or the government in Pakistan where Afghan Ambassador Omar Zakhilwal met with Pakistan's army chief Gen. Qamar Javed Bajwa on Thursday.

Zakhiwal tweeted that the two had a "comprehensive discussion on all key aspects" of Afghan-Pakistan relations, including existing challenges and "mutual misgivings."

Pakistan's Foreign Secretary Tehmina Janjua is currently visiting Washington, where she is believed to have met with officials from the Trump administration in an effort to enhance cooperation between the two sides on combatting terror and other issues.

It was unclear whether the bodies of those killed in Wednesday's strike would be brought to Pakistan for burial.

Islamabad has for years has asked Washington and Kabul to take action against Fazlullah and other Pakistani Taliban believed to be hiding in neighboring Afghanistan and crossing the porous Afghan-Pakistan border to launch attacks inside Pakistan.

Kabul, for its part, has long complained that Islamabad is not taking enough action against militants who use Pakistani soil to launch attacks against U.S., NATO and Afghan forces in Afghanistan.

In recent months, President Donald Trump's cranked up pressure on Pakistan to act against militants by suspending key security assistance to the country. Pakistan denies providing sanctuary to militants and says it has carried out several military operations in the country's tribal regions and elsewhere to kill or arrest militants.

Fazlullah's is the son-in-law of a Sufi Mohammad, a radical anti-U.S. cleric who was recently freed by Pakistan. The cleric, imprisoned in Pakistan in 2009, was released in January from a prison in the northwestern city of Peshawar, following a court order for his release on health grounds earlier that month. - Agencies