ISLAMABAD - Thousands of Protesters rallied in major cities of the country on Friday against US decision to recognise Jerusalem as Israel’s capital, as authorities tightened security outside US missions.

Rallying in small groups, they joined a global chorus of condemnation of President Donald Trump’s decision. Hundreds took to the streets in Islamabad in different rallies. Chanting “Death to Trump” and “Trump is mad”, the protesters censured the Trump administration and warned that the move could lead to more disturbances in the Middle East.

The Jamaat-e-Islami (JI) Islamabad and the local traders held separate rallies after Friday prayers in Aabpara Market. More than a hundred lawyers gathered in front of the Parliament House. Another rally by the Muslim Students Federation was organised at the National Press Club.

National Assembly member Ayesha Gulali addressed a small protest rally in front of the press club. “Jerusalem is a disputed territory. The US decision to recognise Jerusalem as Israel’s capital is unacceptable and condemnable. The move is a threat to global peace,” she said.

In the cities of Lahore and Peshawar, protesters chanted “Down with America, down with Israel and no to Israel occupation”.

Jamaat-ud-Dawa cleric Hafiz Saeed promised bigger protests over Jerusalem and urged the government to convene a conference of Muslim states. “Pakistan should take the lead, being the only nuclear state of the Islamic world,” Saeed said.

Hitting the road in Quetta, various religious parties including the JI, the Jamiat Ulema-e-Islam-Fazl (JUI-F) and the Majlis-e-Wahdat-ul-Muslim (MWM), condemned the US decision of recognising Jerusalem as capital of Israel and shifting there its embassy from Tel Aviv.

After Friday prayers, supporters of the JI and the MWM marched in a rally, which culminated into a demonstration in the Bacha Khan Chowk where they chanted full-throated slogans against the US and Israel. The protesters also burnt US and Israeli flags and an effigy of Trump. 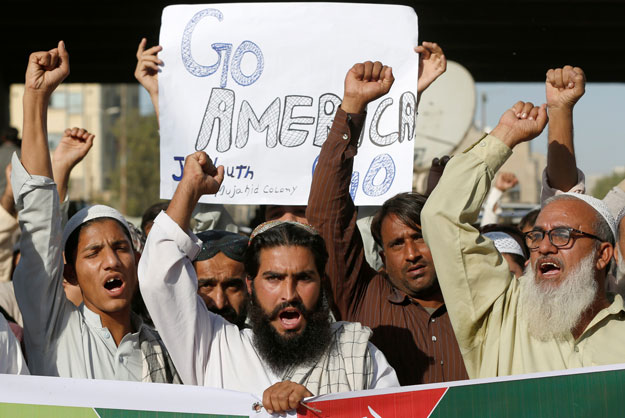 “Today not only in Quetta but around the world Muslims are protesting against this anti-Muslim move,” Zahid Akhtar, the JI District Ameer told the protesters. “Jerusalem is the capital of Palestine, and Israel has occupied the city for many decades… we will never let it happen.”

Alama Hashim Moosvi, the Balochistan chief of the MWM, said Trump’s decision had exposed the US bigotry towards the Muslim world. “Now it is time to unite against the US and Israel, against [their] anti-Muslim behaviour,” he said. “We will protect Masjid al-Aqsa.”

The JUI-F demonstration was held in Manan Chowk. The protesters carried banners and placards inscribed with the slogan “Death to America”. On the occasion, the JUI-F leaders warned that the US decision would stoke tension in the Middle East that would affect the US one day.

Meanwhile, the Balochistan Assembly also adopted a resolution against the US decision. Six lawmakers debated the resolution tabled by the opposition leader.

“Extremism is on the rise in the world, on the other hand Trump is announcing Jerusalem as Israel’s capital that will jeopardise the world peace,” said Asfandyar Wali while addressing a public gathering in Charsadda on Friday.

“Trump has put the world peace in danger,” Asfandyar Wali said. “God knows what had happened to the Americans who elected such a stupid person as their president?”