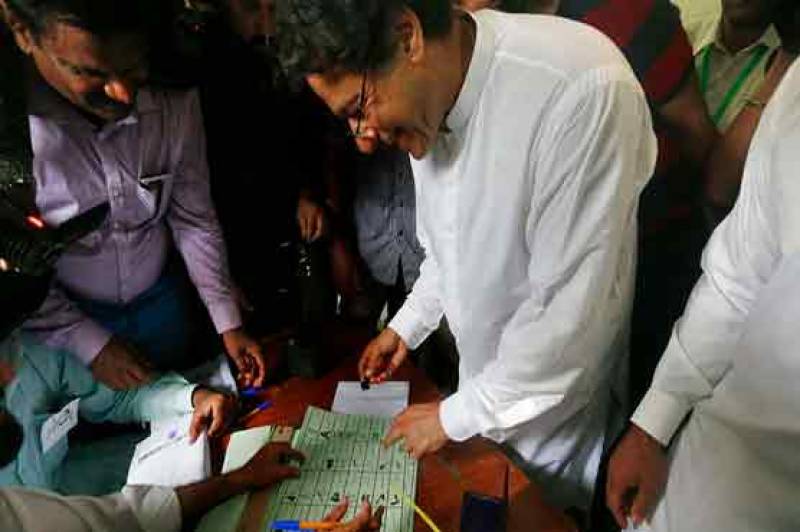 ISLAMABAD – Pakistan Tehreek-e-Insaf (PTI) chairman Imran Khan had to stamp the ballot paper publicly as he couldn’t go behind the voting screen to cast his vote in secrecy due to the presence of a large number of people and media in the room, presiding officer and assistant presiding officer said in a report on Wednesday.

According to the report, Imran Khan couldn’t go behind the voting screen to cast his vote in secrecy as the polling booth had become crowded far beyond its capacity.

The report stated that more than 150 supporters and media personnel entered the polling station along with Imran Khan.

The PTI chairman tried to reach behind the voting screen to cast his vote in secrecy but he couldn’t due to the crowd, the report added. The Election Commission of Pakistan (ECP) will review the report.

The electoral body had subjected victory notification from three constituencies NA-35 Bannu, NA-95 Mianwali and NA-243 Karachi to their final decision in case pertaining to violation of code of conduct.

On July 30, the Commission had issued a notice to Pakistan Tehreek-e-Insaf chairman and Pakistan s Prime Minister-in-waiting Imran Khan, asking him for a written explanation over his alleged voting in full public view and in front of the camera in the just ended general elections on July 25.

Babar Awan, Imran s counsel appeared before ECP after which the ECP asked for a written reply from Khan and adjourned the hearing till August 16.

PTI leader Naeemul Haque had blamed the polling staff present at the booth for the controversial casting of vote.