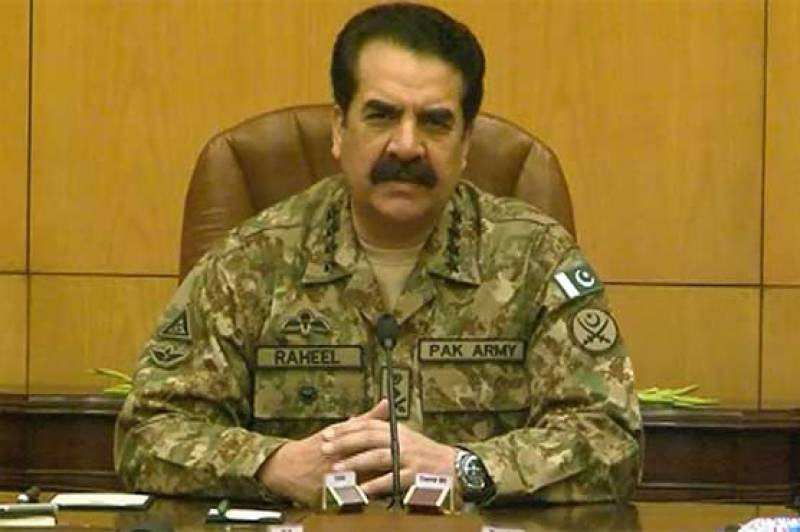 RAWALPINDI: (APP) Following is text of the address of Chief of Army Staff General Raheel Sharif on the occasion of Defence Day of Pakistan on September 6 at General Headquarters (GHQ) here:

Today we have gathered to pay tribute to those martyrs and heroes of the Nation whose unmatched sacrifices, courage and sense of duty has enabled us to breathe in an independent and respectable country.

The war of September 1965 is a glorious chapter of our national history that bestowed a new determination and unity upon the people of this country. The supreme valour of the men and officers of Pakistan Army, Air Force, and Navy has made this day the most distinguished day in the history of Pakistani Nation.

Fifty years later, this day has also become the emblem of the sacrifices, steadfastness, and bravery of all those martyrs and heroes who successfully stood up to such enormous challenges as Operation Zarb-e-Azb and a decade-long war against terror. I want to make it clear to all enemies of Pakistan that Pakistan has always been strong and today it is invincible.

For the past few years, our country is faced with the menace of terrorism and an unconventional war in which the Nation and the Armed Forces have rendered countless sacrifices side by side. While terrorism has crumbled many countries around the world, Pakistan, By the Grace of Allah Almighty, has valiantly fought these challenges.

A few years ago, we were faced with terrorists attacks almost on a daily basis. No part of the country, including defence installations, was beyond the enemy's reach. The writ of the state had practically ended in many parts of the country. North Waziristan had become a hotbed of terrorists. Doubts and misgivings about War on Terrorism were common in many circles. But, Ladies and Gentlemen, as Chief of Army Staff, I held full faith in the capabilities and resolve of the Armed Forces of Pakistan. It was this faith that encouraged us to launch Operation Zarb-e-Azb.

The process of indiscriminate elimination of terrorists from our soil that we started two years ago in the form of Operation Zarb-e-Azb has attained its laid down military objectives, and, today, the Green banner flutters proudly over all parts of our dear homeland.

Since the start of Operation Zarb-e-Azb, we have undertaken over 19,000 operations across the length and breadth of the country to overcome terrorism. In this long voyage of success, Pakistan Army has been aided by invaluable sacrifices rendered by Rangers, Frontier Corps, Police and Levies. Our Intelligence Agencies have played a vital role in these achievements.

The success of Zarb-e-Azb results from unparalleled Tri- Services cooperation. Especially Pakistan Air Force has worked in close harmony with Pakistan Army at every stage of this operation.

This mutual harmony of the Armed Forces is our treasured asset.

During the War on Terrorism, almost 18,000 innocent citizens and 5,000 officers and soldiers of the Armed Forces have laid their lives while over 48,000 Pakistanis have suffered serious injuries.

We shall not allow the sacrifices of our martyrs to go in vain. Zarb-e-Azb might be just another military offensive for the world, but for us, it is the war of survival for our homeland. We shall not hesitate from going to any extents to ensure our national security.

I realize that our brave tribals have borne the hardships of leaving their homes for the sake of peace. Pakistan Army is vigorously engaged in all the projects for the better and brighter future for TDPs and their coming generations. God Willing, the repatriation process for the TDPs will also be concluded soon.

As a nation, we can be rightfully proud of the accomplishments made during this brief span. Now we see the solutions instead of new problems. But we must remember that the internal and external threats to peace have not yet ended completely.

For a lasting peace, it is necessary to ensure country-wide implementation of National Action Plan, formed out of the collective wisdom of the nation, in its true letter and spirit.

Scholars, intellectuals and media must propagate the peaceful and universal message of Islam in order to eradicate the negative notions of extremism.

In order to root out terrorism, we must also remove such weaknesses in or criminal justice system which impede the complete eradication of terrorism.

The evil nexus of heinous crimes, corruption and terrorism is a great impediment to achieving complete peace and is a cause of social unrest. Effective and far-reaching reforms are needed to break this nexus.

For the operation to yield its full dividends, all stake holders and institutions of state must play their respective roles with utmost sincerity and commitment.

Ladies and Gentlemen, While Army and Law Enforcement personnel are putting their lives at stake to curb the Facilitators, Abettors, Financiers and Sympathisers of the enemies, some elements are trying to create an atmosphere of mistrust in the nation towards security and intelligence organizations. Despite all these misgivings and accusations, our morale remains high.

Distinguished Audience, We are sincerely playing our active role for peace in

Afghanistan. But some self-seeking quarters that are definitely not sincere towards Afghanistan, are obstructing these efforts.  I bear upon such elements that Afghanistan is our neighbour and brother Islamic country. Peace and stability there is vital to Pakistan's own interest.

Better management of international border between the two countries takes precedence in our national interest. We want to establish an effective border management mechanism in concert with Afghan government.  I am certain that a better peace environment will lead to our shared economic progress.

We desire peaceful relations with all our neighbours but the fact can never be overlooked that the true assurance of peace in the region is the balance of power. Despite all external machinations and instigations, we are ever prepared for the defence of our borders and are capable to defend our dear homeland in all domains, may it be conventional or unconventional.

We salute the great sacrifices of the people of Indian Held Kashmir for their right of self-determination. The oppressed people of Occupied Kashmir are once again suffering worst form of state terrorism and repression for demanding their due rights.

The true solution for this struggle for self-determination resides not in raining bullets upon the defenceless Kashmiri people but in heeding to their voice and respecting their aspirations.

Kashmir issue can only be resolved by implementing the .

Kashmir is our lifeline, and we shall continue our diplomatic and moral support to the freedom movement at all levels.

Here I want to make it clear that we are fully aware of all covert and overt intrigues and intentions of our enemies. Be the challenge military or diplomatic, be the danger on the borders or within the cities, we know our friends and foes all too well.

We know well how to abide by bonds of friendship and how to avenge upon our enemies.

The greatest example of a relationship based on mutual respect and principle of equality in the region is the Pak-China friendship.

CPEC is the paramount evidence of this relationship. This great project will not only consolidate our mutual economic relations but will also help the overall prosperity of the region. Its timely completion and protection is our national undertaking. I would like to assure that we shall not allow any external force to obstruct it and any such attempt will be dealt with iron hands.

Ladies and Gentlemen, In the end, I salute the innocent children of Army Public

Balochistan's lawyers, martyrs of the nation, valiant men of the Armed Forces, Intelligence Agencies, Rangers, Police, and Levies whose lives were laid in the defence of the country and the everlasting greatness of their resolute families. Your passion reinforces our resolve.

I am proud to command an Army whose officers and men hold aloft the traditions of the great heroes of yore.

I have an unwavering faith in the courage and determination of each of my countrymen. Especially our youth is the herald, custodian and guarantor of Pakistan's bright future.

On behalf of my entire nation, I want to impress upon the enemies of peace and humanity that if we can win, we also know how to protect our victory.

May Allah be our Guide and Protector. Ameen.