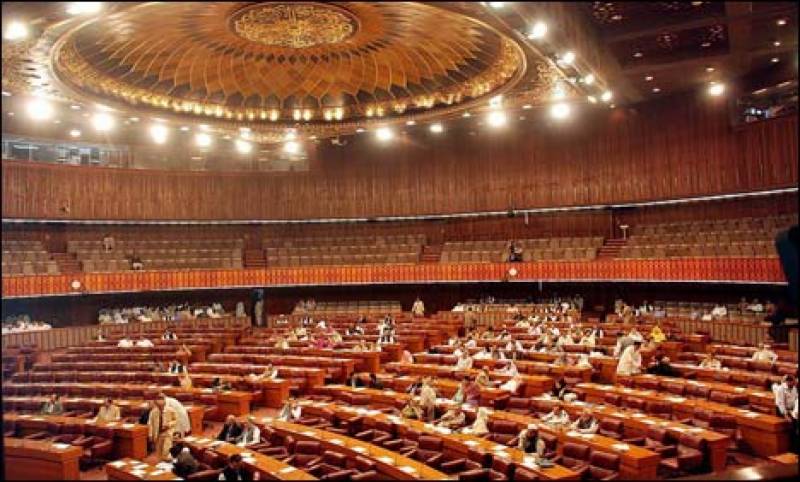 ISLAMABAD (APP): The Senate on Friday referred to the government the extensive policy guidelines for framing foreign policy with its special focus on the Kashmir issue and Pak-India relations.

The House adopted 22 policy guidelines prepared by the Senate's Committee of the Whole and recommended to the government to constitute a Task Force, Media Coordination Committee, appointment of a full time Foreign Minister, regular briefings for foreign media, highlighting Indian intervention into Pakistan and countering Indian propaganda and hegemonic designs in the region.

The Senate recommended to constitute a task force for formulating a doable and sustainable India and Kashmir policy that should include the Chairs of Committees of both Houses on Defence and Foreign Affairs as well as representatives of the foreign office, Ministry of Defence and intelligence.

The House also proposed to constitute a Media Coordination Committee (MCC) selected journalists plus representatives of the Foreign Office, Ministry of Information, Parliament and intelligence to prepare fact sheets and a counter-propaganda campaign against India and to design and promote a media strategy for continually highlighting the Kashmiri freedom struggle.

It desired that there should be periodical and regular special briefings for the foreign media and the social media should also be utilized for publicizing Jammu and Kashmir issue.

Pakistan should re-establish a Public Diplomacy Office in the Foreign Office. This will function as the foreign office's public diplomacy and soft power office and an inter-ministerial space for projecting cultural, economic and trade outputs.

It stated there is need to highlight the Indian intervention in Pakistan and in this context the arrest of serving Indian Navy Commander Kulbhushan Yadav should have been and should be raised at various important international forums along with the human rights violations in Indian held Kashmir.

The House recommended that main thrust of our "Kashmir Narrative" should be violation of UN Charter chapter 1 article 1 and 2 by India which guarantees rights of self-determination; violation of international declaration of human rights in Kashmir by the India forces with highest population to soldiers ratio 1:5; violation of Geneva Convention where prisoners and wounded have certain fundamental rights; India's violations along our eastern border will force Pakistan to pull troops employed to fight war on terror; and the large number of marginalized youth in Jammu and Kashmir can be vulnerable to the incitement of extremist forces and trigger huge challenges for regional and global stability.

It has been recommended to highlight India's own fault-lines in their alienated Muslims, Sikhs, Christians and Dalits as well as the growing Maoist insurgency and in this context, services of two official think tanks whose principal task is to study India, the Islamabad Policy Research Institute (IPRI) and Institute of Regional Studies (IRS) can be attached to the relevant Committees of the Parliament and Modi and his RSS ideology of Hindutva should be targeted.

The House desired a comprehensive outreach to those segments of Indian public opinion which are opposed to Modi's extremism and his anti-Pakistan policies including political parties, media, civil society organizations and human rights groups.

The Senate recommended that countering India's initiatives to demoralize or isolate Pakistan particularly amongst neighbors of Pakistan, SAARC members and members of the Shanghai Cooperation Organisation (SCO) was imperative. The efforts to cultivate Afghanistan, Bangladesh, Nepal, Sri Lanka, Bhutan, Maldives, Myanmar, Iran and the Central Asian republics plus Russia need to be redoubled, for which parliamentarians and parliamentary committees can play a pivotal role.

Pakistan should continue to support all initiatives taken for peace and stability in the region and the nuclear neighbors should exercise serious caution and restraint when faced with provocation.

The Senate asked the government to develop an institutionalized consultative mechanism; seek policy guidelines from the Joint Sitting of the Parliament; the national security committee may be re-constituted in consultation with the Parliament; while there should be a non-episodic role and engagement of OIC in the Kashmir issue.

There is need to also work towards bringing about a climate in which both Pakistan and India can implement politically difficult decisions to build mutual trust and confidence leading towards an honorable and amicable settlement of Jammu and Kashmir as well as peace and stability and the welfare of all people, the House stated.

Keeping in view the need, the policy guidelines recommended that efficacy and usefulness of back channel talks between India and Pakistan, the talks should be restored and the bilateral and Jammu and Kashmir-related CBMs need to be restored and expanded.

It underlined the need to respect the agreed mechanisms for the maintenance of peace along the LoC by strong political leadership in both countries; an international conference on Kashmir should be organized supported and amplified and a loud and clear message shall be sent all across the world that Pakistan is fighting the largest inland war against the terrorism and violent extremism and there is no room for non-state actors.

The House reiterated that the soil of Pakistan should not be allowed to be used by violent non-state actors; and the government should take a firm stance on the Indus Water Treaty and highlight India's credibility in this regard if it unilaterally abrogates its international treaty obligations.

Finally the House demanded from the government that given the constant nature of continual emerging situations it would be appropriate to appoint a full time Foreign Minister.