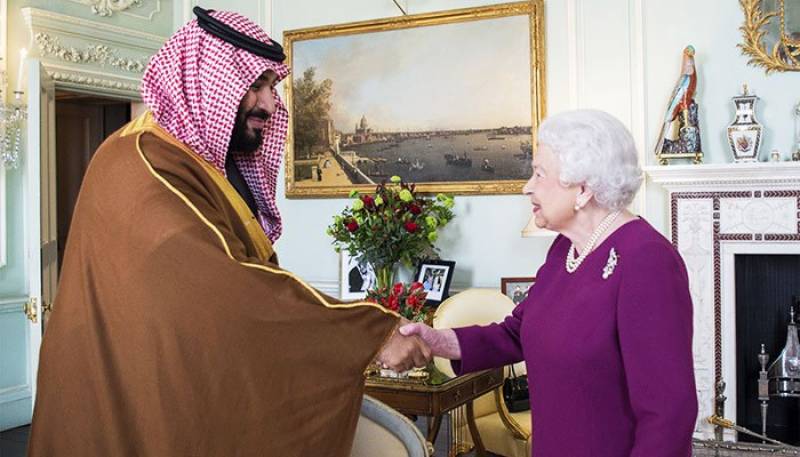 A fiery exchange in parliament between May and opposition Labour Party leader Jeremy Corbyn underlined tension in Britain over Prince Mohammed's trip, which is aimed at building abroader economic partnership between the two countries, but has sparked protests about human rights and war in Yemen.

"The link that we have with Saudi Arabia is historic, it is an important one, and it has saved the lives of potentially hundreds of people in this country," May said, pausing her answer briefly as opposition lawmakers cried "Shame!".

The debate took place as Prince Mohammed lunched with the British monarch on the first leg of trip packed with displays of diplomatic affection designed to help the widen longstanding defence ties into a more far-reaching partnership.

Both countries sense an opportunity to broaden their existing relationship: Britain is looking for trading partners as it exits the European Union, and Saudi Arabia needs to convince sceptical investors about its domestic reforms.

But when Prince Mohammed meets May later on Wednesday, demonstrators will be outside protesting against both countries' roles in Yemen where war has killed an estimated 10,000 people and where 8.3 million people depend on food aid and 400,000 children have life-threatening levels of malnutrition.

Corbyn said British military advisers based in Saudia Arabia were "directing the war" in Yemen and that the government was colluding in events which showed signs of being war crimes. May´s spokesman said the comments were "strange" and he would look into them. - Agencies