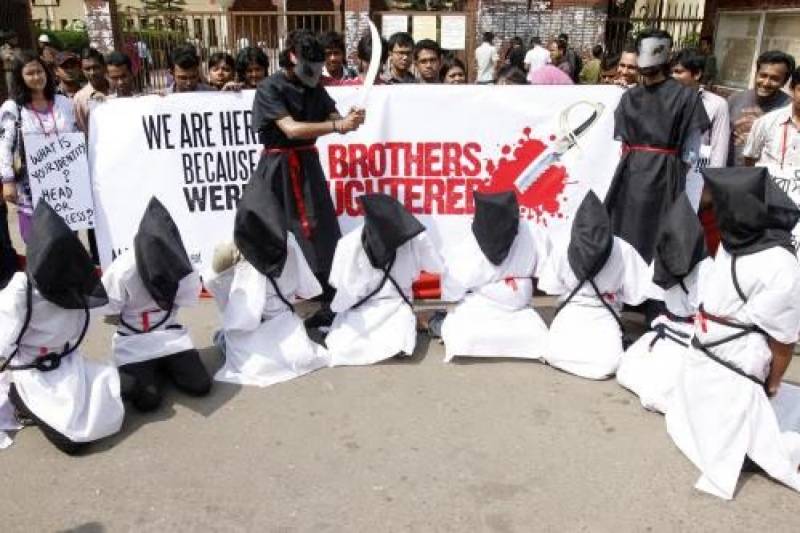 The practice of Saudi justice, however, which largely follows interpretations of uncodified Islamic law, does not measure up to such declarations, and over a decade of reforms have not appreciably strengthened the safeguards against arbitrary detention or ill-treatment, or enhanced the ability of Saudi and non-Saudi defendants to obtain fair trials.

The defects in the criminal justice system are especially acute for the twelve million foreigners living in Saudi Arabia, over one-third of the country’s total population, who face substantial challenges obtaining legal assistance and navigating Saudi court procedures. At 1.6 million people, Pakistanis make up the second-largest migrant community in Saudi Arabia, most of whom travel to the country as foreign migrant workers.

This report is based on interviews with twelve Pakistani citizens detained and put on trial in Saudi Arabia in recent years, as well as seven family members of nine other defendants. All interviews took place in Pakistan with the exception of two telephone interviews with Pakistani inmates in Saudi prisons. Researchers interviewed these individuals between November 2015 and September 2016. Interviews were conducted in Urdu and Punjabi. The criminal cases involved 21 total defendants in 19 separate cases that ranged from minor crimes such as petty theft and document forgery to serious offenses, including murder and drug smuggling, which are often capital offenses in Saudi Arabia.

The Saudi criminal justice system tramples the rights of Pakistani defendants to due process and fair trials.

Nearly all the Pakistani detainees, former detainees, and their family members described widespread due process violations by the Saudi criminal justice system and Saudi courts, including long periods of detention without charge or trial, no legal assistance, pressure to sign confessions and accept predetermined prison sentences to avoid prolonged arbitrary detention, and ineffective or pernicious translation services for defendants.

Due process violations were most consequential for defendants involved in serious cases such as drug smuggling and murder. In Saudi Arabia, judges apply a 1987 ruling by the country’s Council of Senior Religious Scholars prescribing the death penalty for any “drug smuggler” who brings drugs into the country, as well as provisions of the 2005 Law on Combatting Narcotic Drugs and Psychotropic Substances, which prescribes the death penalty for drug smuggling. The law allows for mitigated sentences in limited circumstances.

Of the 21 Pakistanis involved in criminal cases, 15 faced drug-related crimes and authorities charged 11 with bringing in drugs at an international airport. Of the eleven individuals, Saudi courts have given three men death sentences, four individuals had prison sentences ranging between fifteen and twenty years, one had a prison sentence of four years, and three remained on trial.

According to family members, drug traffickers in Pakistan forced under threat of violence four of the eleven individuals to serve as “drug mules.” The family members stated that courts were not interested in the circumstances under which individuals brought drugs into the country and did not attempt to investigate or appear to take into account claims of coercion during sentencing.

In all the non-death penalty cases, judges did not afford defendants an adequate opportunity to mount a defense. Interviewees said that during their first court hearings Saudi judges presented them with predetermined convictions and sentences based solely on police reports and asked defendants to accept the rulings and sentences.

If they chose to dispute the ruling, the courts permitted defendants to submit a written defense, but nevertheless the courts repeatedly summoned them for additional hearings in which judges presented the same predetermined rulings, leaving detainees with the impression that not accepting sentences would mean indefinite pretrial detention.

Five of the Pakistani defendants accepted the rulings during their first court hearing, and all of the others eventually accepted the original rulings merely to halt what they believed would be indefinite pretrial detention and get out of prison as soon as possible. As one detainee stated: “The judge had our case files in front of him. He passed our sentences without listening to our stories.”

Nine of the 21 defendants said that court officials pressured them to give their agreement to court rulings through confessions or stamping the ruling papers with an inked copy of their fingerprints (taken as a sign of consent) without affording them the opportunity to read, review, or fully understand these judgments. One detainee deported in 2014 said that he accepted a conviction on charges of alcohol consumption and fighting after the judge told him verbally that his sentence was 10 days and 80 lashes, which he considered acceptable. He said he was later shocked to discover that the sentence also ordered his deportation, and he said he would have challenged it had he known this. He pleaded with justice officials to take back the decision to no avail.

With one exception, none of the 21 Pakistani defendants in these trials had a defense lawyer largely because they did not have the resources to locate or pay a lawyer while in prison. Largely due to this lack of legal assistance, only the one detainee had possession of court documents or copies of their convictions. Some of the detainees and family members said courts would not provide these documents while others said they did not request them.

Four of the detainees said that court-appointed translators did not provide adequate services, sometimes intentionally misrepresenting detainees’ statements to judges or failing to accurately describe the contents of Arabic-language court documents. Three defendants said that court-appointed translators misrepresented their statements to judges, which they were able to understand having learned limited Arabic living in Saudi Arabia. They said that translators told judges that defendants were pleading for forgiveness while they were actually disputing the charges or conviction.

Seven of the former detainees said that they remained in prison up to eight months following the expiry of their sentences for various reasons, including apparent negligence by prison officials and slow processing of deportation procedures.

In addition to due process violations, some of the Pakistani detainees and their family members described poor prison conditions during their detention, including overcrowding, unsanitary facilities, lack of beds and sheets, as well as poor provision of medical care. One former detainee described his detention experience in the southern province Jazan: “It was overcrowded and the conditions of the prison were deplorable. Often there was no water for days and there was no proper sewage system. The bathrooms were so unhygienic and filthy that we dreaded using them.”

Under the Vienna Convention on Consular Relations, which Saudi Arabia ratified in 1988, it has an obligation to inform Pakistani consular officials when they arrest a Pakistani citizen. Under article 36 of the convention, “…the competent authorities of the receiving State shall, without delay, inform the consular post of the sending State if, within its consular district, a national of that State is arrested or committed to prison or to custody pending trial or is detained in any other manner.” In the cases Justice Project Pakistan and Human Rights Watch reviewed, however, it did not appear that Saudi officials informed Pakistani consular officials about the arrests of the Pakistani citizens, and the burden to inform Pakistani authorities largely fell on detainees and family members. Justice Project Pakistan wrote to Pakistani Ministry of Foreign Affairs officials about all of the Pakistani detainees they learned about but did not receive any response to their inquiries. Furthermore, Justice Project Pakistan researchers said that the family members they interviewed generally did not know which government agency to contact when their relatives were arrested in Saudi Arabia.

Based on interviews conducted with former detainees, current detainees, and family members of detainees, most of the Pakistanis did not seek consular services from the Pakistani embassy in Riyadh or consulate in Jeddah at any point during their detentions because they did not believe Pakistani officials would offer any assistance and they did not want to waste limited money on such phone calls. They said that Pakistani officials rarely if ever visited Saudi prisons, unlike representatives of other countries. Four of the defendants who did contact Pakistani embassy officials said they did not provide any assistance other than deportation processing procedures following prison sentences. Only one of the defendants, who is currently serving a 20-year sentence for drug smuggling, said he met with a Pakistani consular official during his trial. - HRW