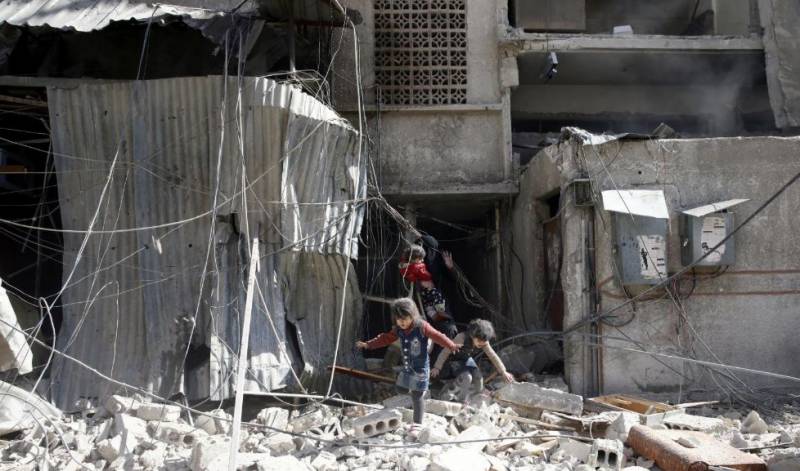 Islamic State fighters and other insurgent groups committed war crimes including deadly attacks on civilians and using them as human shields, the investigators said in their latest report covering six months through January 15.

During the period, “victims of the Syrian conflict have suffered greatly as violence countrywide re-escalated to new heights,” the U.N. Commission of Inquiry said.

“(Syrian) government forces continued to use chemical weapons against armed group fighters in eastern Ghouta,” it said in its report.

Among other key findings, it said that an air strike by a “Russian fixed-wing aircraft” using unguided weapons last November hit a market killing at least 84 people in Atareb, west of Aleppo, in a “de-escalation zone” declared by Russia, Iran and Turkey.

It found no evidence that the Russian strike had deliberately targeted the market, but said “this attack may amount to the war crime of launching indiscriminate attacks resulting in death and injury to civilians”, the first time it has explicitly implicated Moscow in possible war crimes.

And three U.S.-led coalition strikes on a school near Raqqa in March 2017 killed 150 residents - roughly five times the toll acknowledged by the Pentagon, which said at the time that dozens of militants and not civilians were killed.

The U.N. investigators found no evidence that Islamic State fighters were at the site, and said the U.S.-led coalition had violated international law by failing in its duty to protect civilians.

The independent investigators called on all sides to allow access to besieged areas and all detainees. Justice must be served in any peace deal ending the conflict soon entering its eighth year, they said.

The report is based on 500 confidential interviews conducted with victims and witnesses abroad or in Syria via social media. The Assad government has never let the team into the country.

“Vital civilian infrastructure has been decimated by repeated attacks on medical facilities, schools and markets. Humanitarian aid has been instrumentalized as a weapon of war with siege warfare and denial of life-giving assistance used to compel civilian communities and parties to the conflict alike to surrender or starve,” it said.

Syrian government forces used chemical weapons against insurgents in eastern Ghouta, including chlorine three times in July, and in Harasta on the western edge of the zone in November, the report said.

“The use of chemical weapons is prohibited under customary international humanitarian law regardless of the presence of a valid military target, including when used against enemy fighters,” it said.

The Syrian government has denied using chemical weapons, saying it surrendered its stockpiles after signing the global ban in 2013.

“NO PARDONS OR AMNESTIES”

The multi-sided Syrian civil war has killed hundreds of thousands of people and driven at least 11 million from their homes. Neighboring countries and global powers have entered the conflict, backing allied forces on the ground.

The United States joined the war in 2014, leading an international coalition carrying out air strikes against Islamic State fighters in both Syria and Iraq, who were largely defeated last year. Russia joined the conflict in 2015, providing air and ground support for its allies in the Syrian government.

The U.N. investigators, noting that efforts for the U.N. Security Council to refer Syria to the International Criminal Court (ICC) have stalled, due to Russian vetoes, welcomed national jurisdictions taking up more cases.

Victims must be helped to obtain justice, which should be a “central component” of any negotiated settlement ending the war, they said.

There must be “no pardons or amnesties for those responsible for ordering or carrying out gross human rights violations and committing international crimes such as war crimes, crimes against humanity or genocide”.

Re-examining a U.S.-led coalition air strike on a school sheltering displaced people in al-Badiya, Raqqa in March 2017, when the area was controlled by Islamic State forces, they found after extensive interviews with survivors and rescuers that “of more than 200 residents in the school, 150 were killed”.

“Information gathered by the Commission does not support the claim that 30 ISIL fighters were in the school at the time of the strike, nor that the school was otherwise being used by ISIL,” it said.

“The international coalition should have known the nature of the target and failed to take all feasible precautions to avoid or minimize incidental loss of civilian life, injury to civilians and damage to civilian objects, in violation of international humanitarian law.” APP/AFPRussi