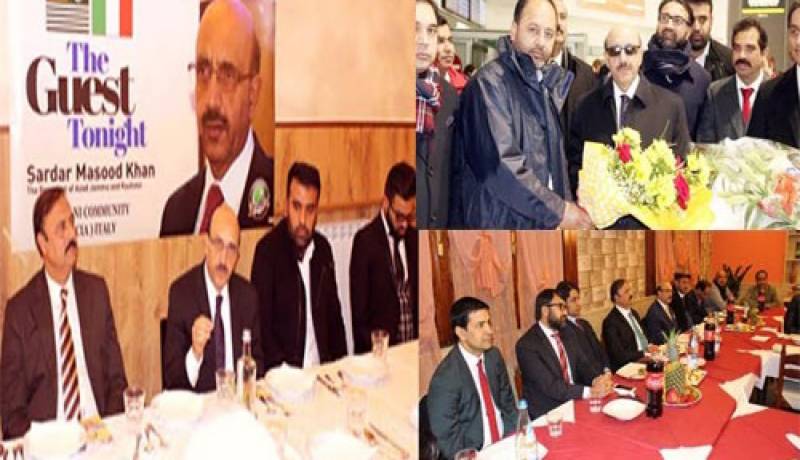 President Azad Jammu and Kashmir Sardar Masood Khan has urged the Pakistani-Kashmiri community in European countries to play their active role in raising the voice of defenseless Kashmiris in Indian Occupied Kashmir.

He was addressing various events organized by the Pakistani-Kashmiri community in Brescia, Bergamo, and Cremona during his two-day official visit to Italy.

He said India must be held accountable by the UN Security Council, International Committee of the Red Cross and the Human Rights Council.

The AJK President said Kashmiris are the most unarmed populace on earth and are leading a peaceful struggle for their right to self-determination and only terrorism in Kashmir is the state terrorism under the patronage of Delhi.

During his interaction at the community events, he appreciated the Pakistani-Kashmiri community-based in Italy for their commitment and resolute struggle for the cause of Kashmir.

The AJK President urged the community members to send letters and other communications to their local representatives, the Italian Parliament and Parliamentarians regarding the human rights situation in the Occupied Kashmir.

President Masood Khan also apprised the community members of the initiatives being taken for the economic development of Azad Kashmir and completion of the projects for the welfare of the people. APP/AFP