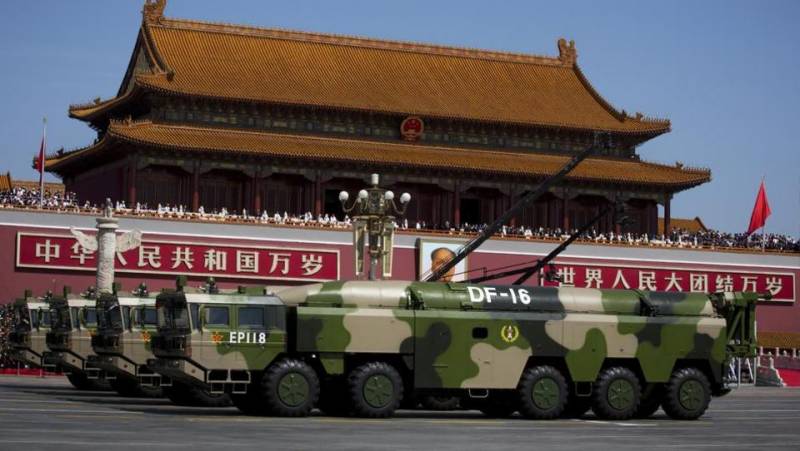 China's newly formed Rocket Force has showcased an advanced ballistic missile with a range of more than 1,000 km that can hit targets across the neighbourhood, including in India, Japan and Taiwan.

State media reports didn’t say when the drill was held but the video was released within a day of James Mattis, US President Donald Trump’s new defence secretary, visiting Tokyo.

On Monday, Japan said Chinese coast guard vessels sailed inside its territorial waters around the disputed Diaoyu islands (Senkaku in Japanese) in the East China Sea, soon after Mattis said the US would defend Tokyo’s control over them.

“Three ships entered the waters surrounding the uninhabited chain,” the Japan Coast Guard said in a statement. The islands are controlled by Japan.

China’s state media issued a veiled warning to neighbours, especially Japan, about the capabilities of the DF-16 missile, which was first revealed at a military parade in Beijing in September 2015.

“Though the PLA has never disclosed its ballistic missiles’ specifications, experts said the DF-16 poses a challenge to foreign military installations along the first island chain, which is what the Chinese military calls the series of islands that stretch from Japan in the north to China’s Taiwan and the Philippines to the south,” state-run China Daily reported.

Quoting Xu Guangyu, a retired major general, the report added that the “DF-16 has a strike range of more than 1,000 kilometers, filling the gap that previously existed with the absence of a medium-range ballistic missile in the PLA’s arsenal”. Xu said the missile is able to reach “Okinawa, a Japanese island about 400 km from the Diaoyu Islands.

The missile, the report said, has a strike accuracy as good as that of a cruise missile. It is also able to manoeuvre in its final stage “to penetrate enemy defensive firepower”, the report added.

“Two types of DF-16 that appeared in the exercise are the bullet-shaped missile that is considered the original DF-16 and a new variant that features a maneuverable warhead and several extra fins.”

A week earlier, Washington Free Beacon, a US-based news website focussed on militaries across the world, said China had “conducted the first flight of the DF-5C intercontinental ballistic missile in January”.

That missile carries 10 multiple independently targetable re-entry vehicles. The DF-5C is the latest variant of the three-decade-old DF-5 family, the report said. The PLA hasn’t confirmed or denied the report.

China has adopted an aggressive posture since President Trump spoke to his Taiwanese counterpart Tsai Ing-wen.

A commentary on the PLA’s website on January 20 - the day Trump assumed office – said the chances of war had become “more real” against the backdrop of a complex security situation in Asia Pacific.