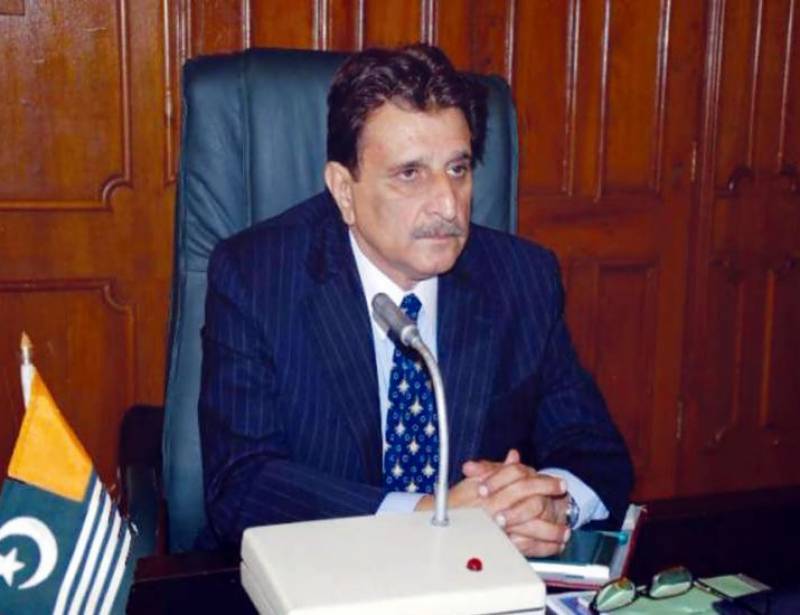 MIRPUR (AJK): Kashmiri community living in Europe have made commendable efforts in highlighting the atrocities and state terrorism let loose by Indian occupying forces against people of Jammu and Kashmir.

This was stated by AJK Prime Minister Raja Farooq Haider Khan during his meeting with Chairman Kashmir Council European Union Ali Raza Syed who called on him on Thursday.

Raja Farooq Haider said Kashmiri Diaspora in Europe presented the true picture of Indian Held Kashmir to the leaders and people of the countries they live in. Kashmiris are the real party of Kashmir dispute whose voice is heard at international level, he added. He said Kashmiris should intensify their efforts to raise their voice with international organizations and human rights forums.

India has virtually turned the held valley to an incarceration center where Kashmiri youth without any fault on their part have been kept behind bar just to quell their voice for freedom or demand of right to self-determination. There has been acceleration in massacring of Kashmiris and blinding them with the use of pellet guns, he said.

The AJK Prime Minister said the reports of United Nations Human Rights Commission and British Parliament should be eye opener to international community. Lukewarm attitude of civilized nations of the world to the plights and tribulations of people of Kashmir reflects discrimination, he remarked.

He felicitated Raza for the efforts of his organization (Kashmir Council European Union) for fighting the case of innocent Kashmiris in Europe.

The Premier told Raza that India realizes that all its tactics and military might to suppress Kashmiris have failed. Any ploy against Kashmiris could not hamper their struggle for right of self-determination, he stated. He said one percent turnout in the recent Punchayat elections in Kashmir practically proves that people of Jammu and Kashmir are not ready to live under Indian rule.

He said international powers should also realize that until Kashmir conflict was resolved dream of restoring durable peace in the region would never be materialized. Basically, Kashmiris are peace loving people but Indian brutalities and savagery against them forced them to retaliate, he added.

He expressed thanks to British Parliamentarian who voiced with Kashmiris against Indian inhuman operations against people of the held valley.

Farooq Haider drawn attention of international community towards Indian forces' targeting children and women with sniper guns from across the Line of Control. World should take notice of these human rights abuses by Indian forces against civilian population of AJK, he maintained. He called upon United Nations to send its delegation to IHK and added that we would welcome any such fact finding mission in AJK.