Shahid Afridi is the hugest crush of my life: Bollywood Star
6 Oct, 2017

DUBAI - Bollywood actress Zareen Khan, who is a celeb ambassador of the team Pakhtoons in upcoming 10-overs-per-side T10 Cricket League, has said that she has a hugest crush on former Pakistani cricketer and part of the team Shahid Afridi and this is the main reason she is supporting this franchise.Continuing her speech, Zareen Khan said that she was born in India but belongs to a Pakhtoon family. She said that it’s the best thing people of India and Pakistan could do to revive peace by showing that there is no animosity between them. 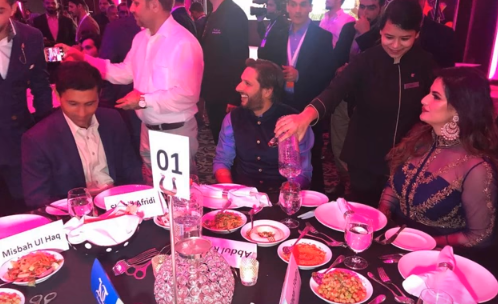 Talking about Shahid Afridi, Zareen said "I have been a fan of Afridi from the very first day he had played his match, I think he was 16 and scored 100 runs on 32 or 35 balls." I was an admirer of his hair and his looks, she added.

Zareen further said that meeting with Afridi is a dream come true.On the other hand, Shahid Afridi said that “When (Pakhtoons franchise owner Habib Khan) came to me and told about this, I said ‘Please, let me play in this format’.”

The league’s president, Salman Iqbal hoped the idea will kick off.The tournament will be as swift as the format, lasting just four days from 21-24 December with former Pakistan captain Misbah-ul-Haq and Bangladesh’s Shakib Al Hasan also featuring.The six teams which will feature in the inaugural edition of the T10 tournament are: Maratha Arabians, Punjabi Legends, Bangla Tigers, Keralites King, Colombo Lions and Pakhtoons.