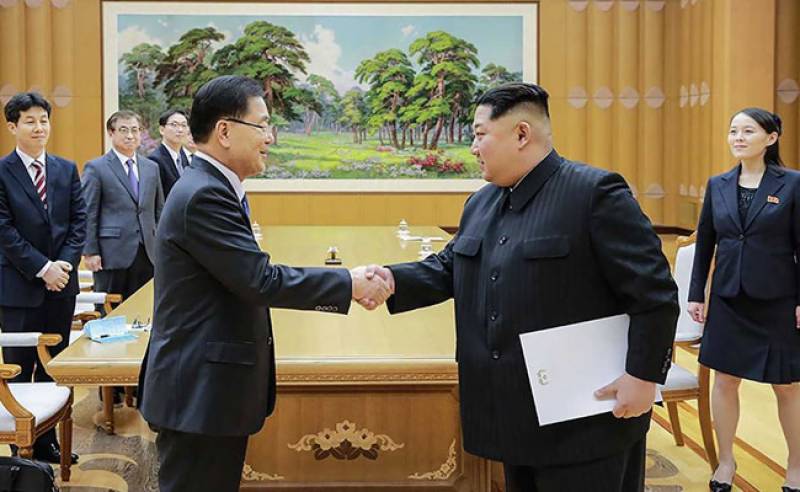 Seoul:North Korean leader Kim Jong Un discussed a possible summit with envoys from the South's President Moon Jae-in, both sides said Tuesday, in the latest step of an Olympics-driven rapprochement on the divided peninsula.

The delegation from Seoul is the most senior to travel North for more than a decade, and comes as Moon tries to broker talks between nuclear-armed Pyongyang and Washington after months of high tensions.

"Hearing the intention of President Moon Jae In for a summit from the special envoy of the south side, he exchanged views and made a satisfactory agreement," KCNA added.

But Seoul said no agreement had yet been reached on a meeting between Kim and Moon, which would be the first such summit since 2007.

"It's not an agreement, it's discussions," an official from the South's presidential Blue House told AFP, adding that the two sides had "somewhat shared the view" on other points.

Kim's talks with the South Koreans lasted more than four hours, and included dinner at the North's ruling Workers Party headquarters in Pyongyang, according to the Blue House.

Details will be made public after the delegation returns late Tuesday, it said.

The North's Rodong Sinmun newspaper, the mouthpiece of the ruling Workers Party, devoted its entire front page Tuesday to the visit under the headline "Comrade Kim Jong Un receives special envoys from the south's president".

The main picture showed Kim with the five South Korean officials in the delegation, and it carried seven other front-page images of the talks -- at which Kim's sister Kim Yo Jong sat to his left -- with more coverage inside.

The Seoul delegation's visit comes after the North's leader sent his sister to the Winter Games in the South and invited Moon to a summit in Pyongyang.

Kim Yo Jong's trip was the first visit to the South by a member of the North's ruling dynasty since the end of the 1950-53 Korean War, and her appearance at the Games' opening ceremony -- where athletes from the two Koreas marched together -- made global headlines.

At the time Moon did not immediately accept the invitation to Pyongyang, saying that the "right conditions" were needed.

Moon has sought to use the Pyeongchang Games to open dialogue between Washington and Pyongyang in hopes of easing a nuclear standoff that has heightened fears over global security.

In a demonstration of the careful path he must tread, Moon stressed the importance of dialogue with the North to newly commissioned army officers Tuesday, but also vowed to strengthen Seoul's military alliance with Washington.

"We must talk with North Korea for the denuclearisation of the Korean Peninsula," Moon said.

"But at the same time, we must devote our energy on swiftly and effectively developing capabilities to counter nuclear and missile threats from the North."

His envoys' trip to Pyongyang showed that "we can achieve denuclearisation and peace on the Korean peninsula through our own efforts", he said, but added he will "further solidify" Seoul's joint defence posture with Washington.

While Pyongyang has long said it is willing to talk to the US without preconditions, it is also adamant it will not give up the "treasured sword" of its nuclear weapons, which it says it needs to defend itself from a possible invasion by the United States.

Washington insists that the North must take concrete steps towards denuclearisation before negotiations can take place.

It was not clear whether the two Koreas discussed denuclearisation on Monday. Asked if the topic had come up, a senior Blue House official was quoted by Yonhap as saying: "I assume so."

The Winter Olympics were held by "fellow countrymen of the same blood" and provided "a good atmosphere of reconciliation, unity and dialogue between the north and the south," KCNA quoted Kim Jong Un as telling the South Korean envoys.

Before leaving for Pyongyang, the South's national security advisor Chung Eui-yong said: "We plan to hold in-depth discussions for ways to continue not only inter-Korean talks but dialogue between North Korea and the international community including the United States."

It is a challenging task -- in defiance of UN sanctions, the isolated and impoverished North last year staged its most powerful nuclear test and test-fired several missiles, some of them capable of reaching the US mainland.

US President Donald Trump dubbed Kim "Little Rocket Man" and boasted about the size of his nuclear button, while the North Korean leader called Trump a "mentally deranged US dotard".

They traded threats of war and sent tensions soaring before a thaw in the run-up to the Winter Olympics, which were attended by athletes, cheerleaders and officials from the North, and the two Koreas fielded a unified women's ice hockey team. APP/AFP