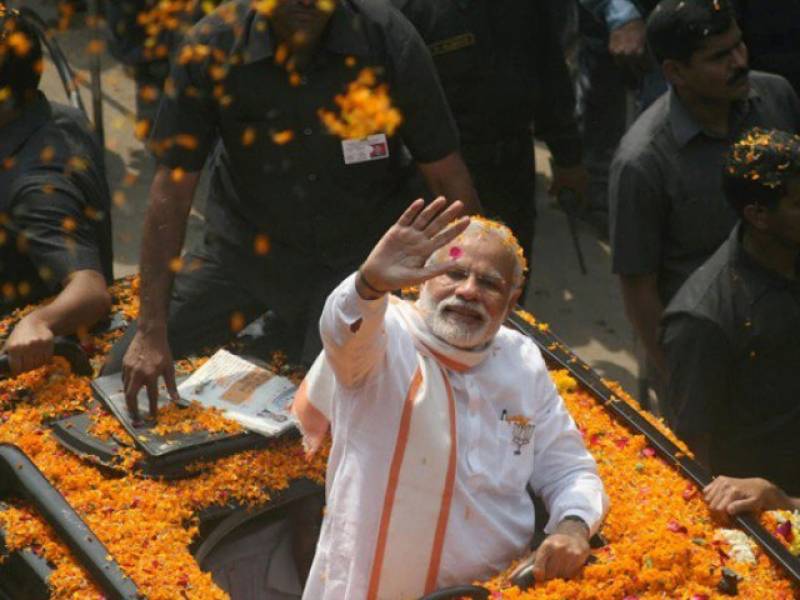 VARANASI, INDIA: Varanasi boat owner Prabhu Sahani backed Narendra Modi as his MP in the 2014 general election. But the Indian prime minister will not be getting his vote when the ancient city on the Ganges goes to the polls again on Wednesday.

“He doesn’t understand Varanasi,” complained Sahani, 34, whose boats ferry tourists and pilgrims along the holy river.

“We run the oldest transportation in the city, going back generations, and he didn’t consult us about his plans (to clean up the Ganges and modernise the city).”

Modi’s decision to stand in the sacred Hindu city in Uttar Pradesh rather than his home state of Gujarat in 2014 paid off with an overwhelming victory that he celebrated with a prayer on the banks of the Ganges.

Now his Hindu nationalist Bharatiya Janata Party (BJP) is trying to consolidate its grip on power by seizing control of India’s most populous state, which stretches from the high-rise outer edge of the national capital in the west to the city on the Ganges where Hindus go for salvation in the east.

It faces stiff competition from the locally ruling Samajwadi Party (SP) in a state where caste, family and religious affiliations run deep.

Leader and current chief minister of Uttar Pradesh, Akhilesh Yadav, has rejuvenated the SP’s image since he toppled his ageing father this year, forging an alliance with the national opposition Congress Party, and campaigning alongside its equally youthful deputy leader Rahul Gandhi.

Wednesday’s vote will be the final stage of a bitter weeks-long battle for the state that analysts say is too close to call.

It is a key test of Modi nearly three years after he came to office pledging inclusive government and a “shining India” that would provide jobs for a growing youth population.

As voting day approached in Varanasi, one of the world’s oldest cities, the once putrid banks of the Ganges were certainly shining brighter.

Locals said cleaners now came four times a day to sweep the ghats, where bodies are brought to be cremated according to centuries-old Hindu tradition.

Modern changing cabins have sprung up along the river, although most stood empty as ritual bathers stripped off next to them in the open, just as they have always done.

“You used to see dead bodies of animals and sometimes even people floating in the river. Now that has decreased,” said boatman Suresh Sahani, who planned to vote BJP, as he touted for customers in the hot sun.

Away from the river, however, there were few signs of the “smart heritage city” that Modi promised.

Work has begun on underground cables to replace the tangle of electricity wires that hang precariously over the city’s narrow streets.

But for now that only worsens the congestion, forcing honking cars, rickshaws and bicycles into an angry single lane of traffic that is often brought to a standstill by a stray cow.

Varanasi’s BJP Mayor Ram Gopal Mohley blamed the state government for the pace of progress, saying hundreds of millions of dollars had been provided from federal coffers to develop the city’s infrastructure.

“They have been creating all the hurdles, but not for long. We will form the government on March 11 and things will change,” he told AFP.

“Whatever Modiji (ji is an Indian honorific) is doing for his constituency is good.”

With all to play for, party leaders flocked to Varanasi over the weekend to rally support.

Modi touted his party’s investment in the city and said the weavers of its famous silk had been given “modern facilities”.

But there was little sign of that in the impoverished Muslim neighbourhood where much of the silk is made.

“All the candidates come to this area, they say a lot, but nothing happens,” said Azib, who scrapes a meagre living making saris.

Master weaver Ramzan Ali Ansari said his sales had fallen by 50 percent since the government withdrew most bank notes from circulation last November in a shock move aimed at combatting widespread tax evasion.

No one in the community – a bedrock of support for the secular Congress Party – said they would back the BJP, which has fielded no Muslim candidates in UP. Nearly 20 percent of the state’s population is Muslim.

“At least they (Congress) are not against Muslims,” said Ansari.

Back in the teeming heart of the city, traffic officer S. Ahmed battled to channel the chaotic flow at a busy junction.

Asked about the prospect of Varanasi becoming a smart city, he smiled wryly.

“The outskirts are developing, proper roads are being built. But you can’t demolish the alleys of the old city,” he said.