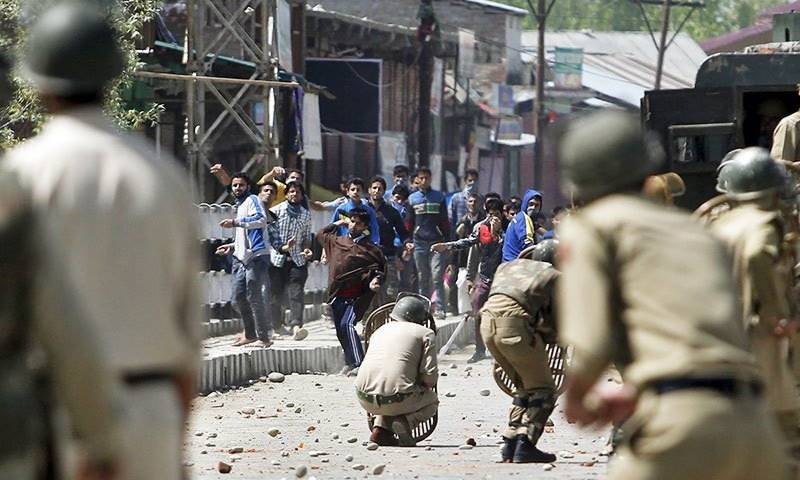 A police officer and two suspected militants were killed in India-held Kashmir during a fierce 15-hour gunfight overnight, an Indian official said Sunday, triggering clashes between protesters and security forces.

The firefight erupted late Saturday when Indian soldiers and counter-insurgency police, acting on a tip-off, surrounded a home believed to be occupied by militants in southern Nazneenpora village.

Soldiers detonated explosives during the siege, which stretched into the early hours as both sides exchanged heavy gunfire.

“Two militants were killed in the encounter. We also lost a boy of SOG,” director general of police S. P. Vaid told AFP, referring to the slain officer from the Special Operations Group.

A Major was also critically wounded in the battle, an army officer said, speaking on condition of anonymity as he was not authorised to talk to the press.

Defying orders to stay indoors as the skirmish escalated, hundreds of villagers descended on the scene, throwing rocks at armed forces in a bid to aid the besieged militants, a police officer said.

The clashes resumed Sunday as protesters chanting pro-freedom slogans descended near the scene of the firefight, said the officer who asked to remain anonymous.

Police and the Indian army routinely complain that civilians assist militants during clashes with armed forces, a frequent occurrence in the divided and volatile state.

For decades rebel groups have fought the roughly 500,000 Indian troops deployed in the region, demanding independence or a merger with Pakistan for the majority Muslim region.

Kashmir has been split between India and Pakistan since the end of British rule in 1947. Both claim the territory in its entirety. The fighting has left tens of thousands, mostly civilians, dead.