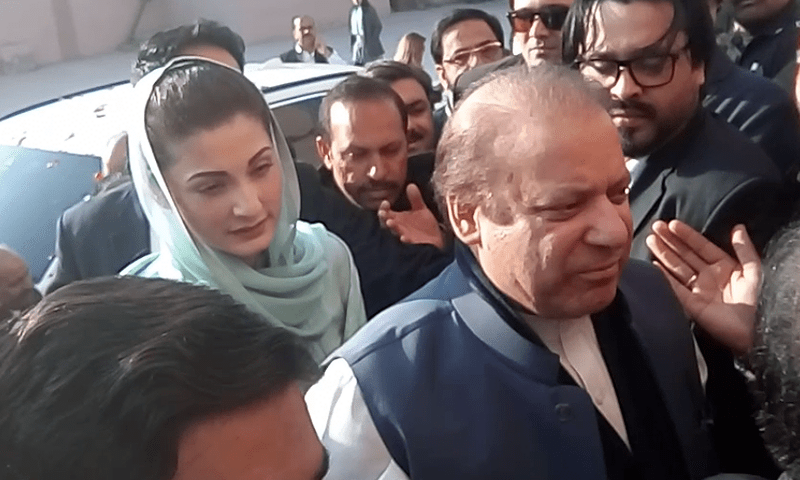 The judge arrived at the Federal Judicial Complex at 9:35am on Friday. He heard Mr Sharif’s request to delay the verdict and reserved his decision for an hour.

Lawyer Amjad Pervaiz requested the court to delay the verdict for a week. The former PM has not mentioned a date for his return in his application. The lawyer also presented a medical certificate of Begum Kulsoom Nawaz dated July 3 before the court.

On the other hand, NAB requested the court to reject the plea. If rejected, the decision will be announced right away and the Sharifs might be sent to jail.

Mr Sharif and his family have been facing trial before the accountability court. Three corruption references were initiated against them after the Supreme Court disqualified Mr Sharif for life from holding public office. The ruling in one of the references, which pertains to the Sharif family’s London properties, is expected on Friday.

Mr Sharif, his daughter Maryam Nawaz Sharif and son-in-law Capt (retd) Safdar are accused in the case. His sons, Hussain Nawaz and Hassan Nawaz, have been declared proclaimed offenders.

Amjad Pervaiz, the lawyer of Maryam Nawaz, has arrived at the court. PML-N leader Asif Kirmani is also present. The lawyer of Mr Sharif, Khawaja Haris, has yet to arrive.

NAB prosecutor Sardar Muzaffar said at the court that former PM Nawaz Sharif could be sentenced to 14 years in prison under Section 14.

A large number of police and Rangers personnel are present at the Federal Judicial Complex, where the accountability court is located. Two armoured personnel vehicles are also stationed outside the court. The district administration has also imposed Section 144 in Islamabad.

On Tuesday, the accountability court reserved its decision in the Avenfield reference. It announced that the verdict will be issued on Friday. It also issued notices to the accused, asking them to appear on the day.

On the other hand, the former PM and his daughter have been in London since June 15. They had initially gone to spend Eid with former first lady Begum Kulsoom Nawaz. However, Begum Kulsoom suffered a cardiac arrest a day before her husband and daughter arrived. She has been on life support at the Harley Street Clinic since June 14.