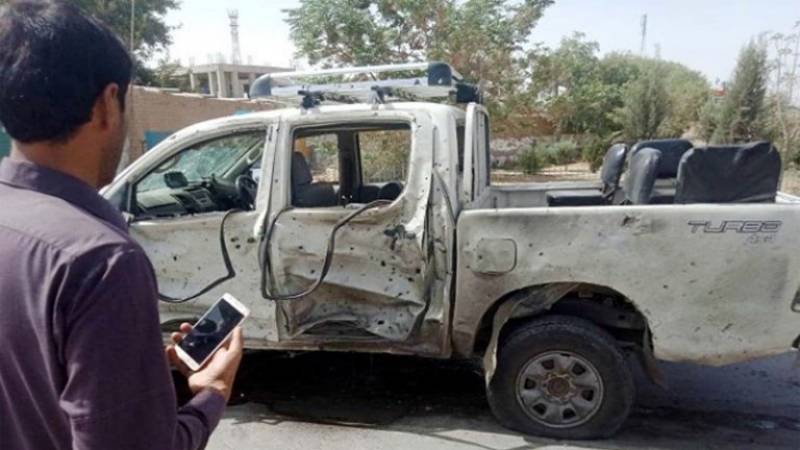 QUETTA - At least eight people including a Levies official and two levy men were injured in a remote control device blast near Police Line at Bypass area of Pishin district on Sunday. According to Levies sources, an explosion was occurred when a Levies Naib Tehsildar Bostan Abdul Karim Tareen along with his gunmen was passing through the area in a vehicle at Pishin’s Bypass. As a result, eight people including Naib Tehsildar Abdul Malik Tareen, his driver Salahuddin and his gunman Abdullah received injuries on the spot. The injured were shifted to nearby hospital where the victims were referred to Civil Hospital Quetta for further treatment in view of their critical condition after completing initial medical processes. Nearby buildings were also damaged in powerful blast. Local administrations including police, Levies forces and law enforcement agencies reached the site soon after the incident and cordoned off the area and started investigation. Chief Minister Balochistan Mir Jam Kamal Khan strongly condemned the incident of attack on security forces in Pishin. He said nefarious designs and coward attack of terrorist could not weaken the strong commitment and passion of the nation, said press release issued here today. Jam Kamal directed concerned authorities to take all available measures to arrest those elements involved in the remote control explosions on security forces in Pishin for justice as soon as possible. He ordered the health department to ensure all facilities to the injured during treatment and prayed for early recovery of the victims. Balochistan Minister for Home Mir Zia-Ullah Lango also condemned the incident of Pishin blast and and directed concerned officials to submit report after completion of investigations process. He was talking to media after visiting the civil hospital Quetta soon after the blast of Pishin. Home Minister said such cowardly attack has not weaken nation moral and our security forces, war is continued against terrorists in country including Balochistan till their ending from the areas, saying that our brave security forces are being investigated into the matter for bring suspects for justice at any cost. “Terrorist attack in Balochistan was linked with Afghanistan”, he said, adding that United Nation would make formulation of a task force for Afghanistan country in order to maintain peace there, because peace of Afghanistan is important for Pakistan including Balochistan. Earlier, he inspected the civil hospital Quetta to inquire after the treatment of injured victims and prayed for early recovery of them. - APP