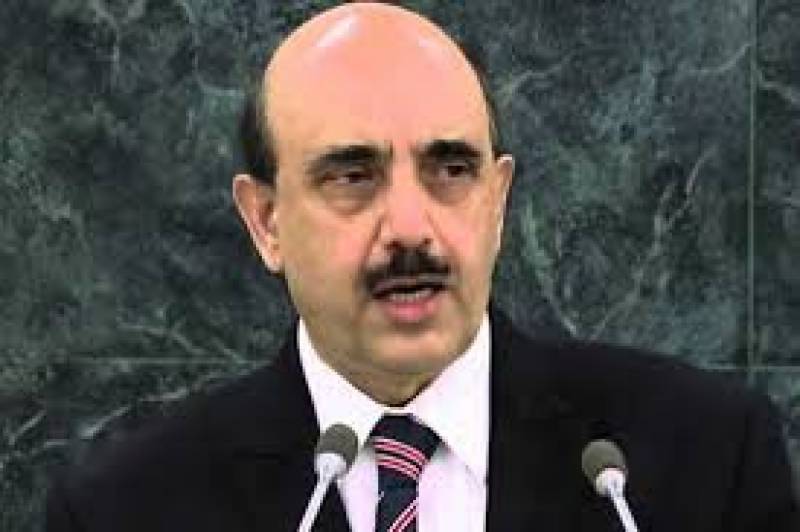 ISLAMABAD- Azad Jammu and Kashmir (AJK) President Sardar Masood Khan on Wednesday welcomed the motion tabled in the New South Wales Parliament of Australia to express concern over human rights violations and calling for respect to the right to self-determination of the people of Jammu and Kashmir.

“We appeal to the mover of the motion David Shoebridge, other MPs and the members of the Australian civil society to convince the Australian government to support the right of self-determination of the people of Jammu and Kashmir and to speak up against the crimes against humanity being committed by the Indian government and the occupation army in the held territory,” he said.

Addressing a webinar on the completion of one year of India's illegal actions in the Indian Illegally Occupied Jammu & Kashmir (IIOJK) organized by Pakistan High Commission in Australia, Sardar Masood said Australia was an important country of the Oceania region, which could not remain indifferent to the happenings in Kashmir, according to a press release.

AJK president the recent illegal actions taken by India in the IIOJK should open the eyes of the whole world as what India was doing in the disputed territory was an open war against humanity and the human values.

He said although the world was largely aware of the brutalities being perpetrated by India against the defence less and innocent people of Kashmir, but many important countries were silent and tight-lipped because of their political, strategic and economic interests.

India, he said, was stubbornly trampling human rights and international humanitarian laws in the occupied Kashmir, and had become a big danger for the peace and security of the world. The silence of influential and powerful countries was further encouraging India.

The ongoing struggle in occupied Kashmir was not a secessionist movement but it was a struggle for upholding human values and human dignity, he added.

The AJK president urged the participants of webinar to convey the voice of the oppressed people of occupied Jammu and Kashmir to the members of parliament (MPs), government officials, media and the civil society of Australia.

David Shoebridge highlighted the human rights violations in Kashmir and stressed on the need for the resolution of Kashmir dispute on the principle of the right to self-determination.

Senator Lee Rhiannon, in her remarks, stated that the IIOJK people were being denied their basic human rights and facing a grave humanitarian crisis that required urgent international attention.

She stated that with greater global awareness, the civil society and the force of public opinion would compel the governments to stand up with the Kashmiris.

Claude Rakisits said the scrapping of the special status for Jammu and Kashmir had been on a manifesto of Modi’s Bharatiya Janata Party for the national election in 2019, so there was no real surprise to that move.

Highlighting the need for following the rule-based international order in the IIOJK, Professor Samina Yasmin d informed the participants how India had since long been flaunting the same. She also gave specific examples from the ongoing military siege in the IIOJK, to emphasize the flagrant disregard of the international system by India.

High Commissioner Babar Amin, in his remarks, thanked all the speakers for their principled position on the illegal actions, military siege, and human rights violations in the Indian Illegally Occupied Jammu and Kashmir.

He dilated upon the sacrifices of Kashmiris for the exercise of their inalienable right to self-determination, which had been promised to them by the International community.