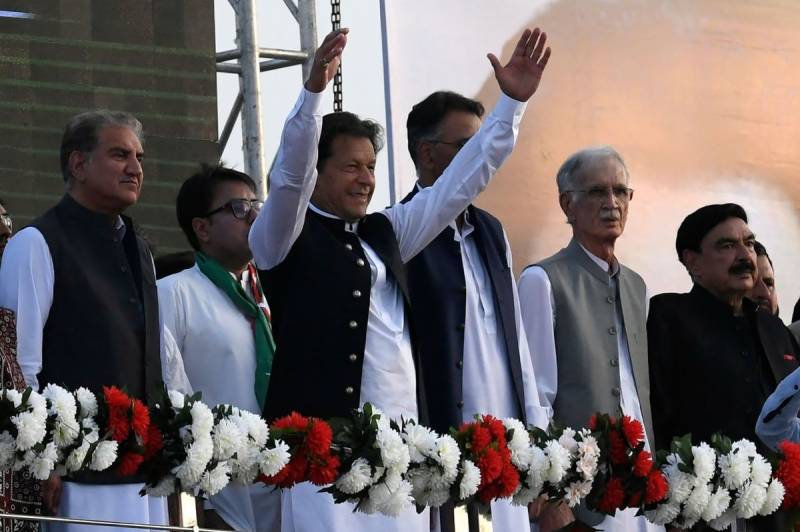 So much for Prime Minister Imran Khan’s “New Pakistan.” Faced with growing discontent among his own lawmakers and allies, Khan told the president to dissolve parliament and called for fresh elections link after a hotly anticipated no confidence vote against him was abruptly canceled Sunday.

“Prepare for elections,” Khan said in a televised speech to the nation. “No corrupt forces will decide what the future of the country will be,” he said, repeating the allegation that the U.S. is working with his rivals to overthrow the government.

Drawing outrage from the opposition, which says it has the numbers to force him from office and take power, his move is now expected to be tested in Supreme Court. Opposition leader Shehbaz Sharif warned that Khan would be charged with treason for violating the constitution. It’s a well trodden path in Pakistan, where high treason — and the death penalty that comes with it — has been used against former military leader link and president Pervez Musharraf (he lives in Dubai and has managed to escape the verdict handed down in 2019 that sentenced him to death.

Indeed, no Pakistani leader has served a full term in office, due to assassinations, martial law, votes of no confidence and arbitrary dismissals. Khan’s term, which began on in August 2018, isn’t due to end until August 2023. Had the trust vote gone ahead, he would have taken his place in that long list of failed prime ministers and presidents. It’s likely he still will.

One of the most telling moments in the weeks of turmoil that lead up to the canceled vote happened Saturday, when the country’s powerful military chief openly criticized Russia for its war in Ukraine. General Qamar Javed Bajwa said Moscow’s actions had resulted in a “great tragedy” that had killed thousands and made millions refugees, in a significant departure from Khan’s more neutral tone. Khan visited President Vladimir Putin in Moscow the day Russia invaded its neighbor as part of a long-planned overseas mission.

Bajwa’s statements also appeared to be an attempt to reposition Pakistan back toward the U.S. — again, in obvious opposition to Khan. Pakistan seeks to broaden and expand relations with both China and the U.S. link, Bajwa said, without “impacting our relations with either.”

A former cricket great, Khan has gone from being seen as too close to the military, which has ruled Pakistan for nearly half its 75-year history, to now falling out link with the organization widely viewed as the real power in the South Asian nation. Last week he blamed a “foreign funded conspiracy” for trying to remove him from power, tapping into a deep well of anti-U.S. sentiment that emerged in response to American foreign policy post-9/11. U.S. State Department spokesman Ned Price said there was “no truth link” to the allegations.

Khan’s Pakistan Tehreek-e-Insaf (Justice) party has 155 seats. With the help of coalition partners, he’s retained a slim majority of little more than 172. The joint opposition of former Prime Minister Nawaz Sharif’s Pakistan Muslim League-Nawaz and the Pakistan People’s Party run by Bilawal Bhutto Zardari, the son of assassinated former leader Benazir Bhutto, has more than 160 seats. They needed 172 votes in Pakistan’s 342-seat parliament to unseat the prime minister. If successful, it would have meant the return to the dynastic politics that Pakistanis have grown so weary of.

This continuing political instability will only worsen Pakistan’s precarious economic position. There is significant pressure

His government has also been grappling with a deteriorating security situation since the Taliban returned to power in neighboring Afghanistan last August. That’s provoked a resurgence of militancy in Pakistan — including the bombing of a Shiite mosque in Peshawar last month claimed by the local chapter of Islamic State link that killed as many as 60 people and wounded almost 200. Opinion. Data. More Data.Get the most important Bloomberg Opinion pieces in one email.

Pakistan’s constitution calls for the establishment of an interim government to take the country to the elections, which must be held within 90 days. Khan may have dodged the vote of no confidence for now, but a Gallup Pakistan poll taken in February showed his approval rating had fallen to 36% from 40% in 2018, while Nawaz Sharif’s had more than doubled to 55%. As many as two dozen of his own lawmakers have turned against him, as has the army. Khan is in trouble, no matter which way you cut it.

The question now is how much unrest he and his opponents will incite before another poll can be held or the Supreme Court can sit. Tens of thousands of Khan’s supporters gathered in the capital Islamabad on March 26, which followed a major anti-government rally weeks earlier. Expect more of this, and all the danger it brings. Pakistan’s 220 million citizens deserve better.