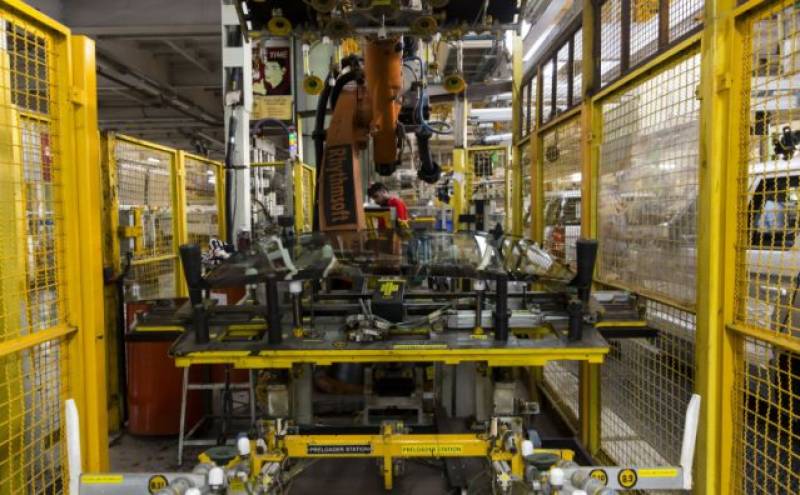 ISLAMABAD - Nonagenarian Bharatiya Janata Party leader LK Advani once said about Prime Minister Narendra Modi that he could hold a masterclass in event management: a rather acidic dig at the latter’s ability to manipulate the news feed.

But even that dexterity is apparently getting nullified as dark clouds envelop the Indian economy in a bear embrace. The headlines said it all: ‘October 2019 PMI (Purchasing Managers Index for the manufacturing sector) has crashed to a two-year low, and consumer confidence is lowest in over 30 months’.

But that was not all: unemployment peaked at a staggering 3-year high of 8.5% (according to Centre for Monitoring Indian Economy) even as core sector output shrank by 5.2% to hit a wretched 14-year low in September 2019.

After doing a weekly serial of mini-budget announcements to neutralize the disastrous repercussions of a dismal budget, Finance Minister Nirmala Sitharaman, instead of reviewing the impact of her policy changes, spent considerable time doing what the BJP does brilliantly: blame the Congress party.

It was puerile, and frankly, preposterous. Her pugilistic propensities boomeranged when former Governor of the Reserve Bank of India Raghuram Rajan had to remind her that he spent two-thirds of his term under the BJP (curiously she accused him for the public sector banks’ NPA mess when he is the one who shepherded the clean-up).

The Indian economy is headed for a serious stagnation unless the complacent government, that is in a deep sleep like Rip Van Winkle, wakes up. RBI itself has lowered India’s GDP growth forecast for FY 2019-20 to 6.1% which will be the lowest in 6 years. The IMF, World Bank, etc. are all equally bearish. Credit rating agencies have downgraded their expectations too as the once favourite emerging market darling turns sour, effectively squashing its rising curve.

While there are several reasons for the virtual recession in India like rising rural distress, record levels of joblessness, falling consumer demand and comatose private capital investment, flat exports, the unresolved twin balance sheet problems of bank NPAs and large wilful defaulters, the collapse of the NBFC sector triggered by ILFS, there are four distinct red flags that should worry us all Indians.

To say that the Indian economy is gasping for breath on a ventilator will not be an exaggeration. Resuscitating it will not be easy unless first the government accepts the severity of the dilapidation: it still gives the impression of living in a fool’s paradise.

Firstly, Indian government’s data integrity has itself become questionable. We are being compared to China’s dodgy data, pregnant with brazen manipulation. For example, the CAG reported that India’s real fiscal deficit could be as astonishingly high as 5.8%, while the government claimed it was 3.46%.

For a long time, the government trashed the official unemployment figures which are at a record 45-year high. Farmer suicides data has not been made publicly available for the last couple of years. Why? What is the government trying to hide? This is a pharaonic damage to our global credibility among international investors.

The second gigantic problem is that the government seems to have completely ignored the vital role of agriculture, where 50% of our people are employed. The doubling of farm income by 2022 is a complete sham, literally impossible to even fathom, forget its accomplishment. The agricultural sector grew by a measly 2% over the period of 2014-19 despite excellent monsoons in the last 3 years, and was almost half of UPA’s 3.85%.

The BJP reneged on its promise of giving Minimum Support Price by telling the Supreme Court of India that it would distort market rates. Understandably, farmer protests rose from 628 in 2014 to 4,837 in 2017. The real wages of agriculture labour barely rose by 1% in the last few years compared to almost 10-15% in the past decade.

In short, a government that seems to be obsessed with inflation-targeting decided to nonchalantly dump the farmers by the wayside. With farm incomes at an abysmal 14-year low, once can see the decline in rural demand now devastating the formal sector as well resulting in the economic slowdown.

The attempt to keep prices low has come at a great cost to those who are most vulnerable in our ecosystem.

Thirdly, the government seems to have misread the problem confronting the economy which is actually a demand contraction created by the voodoo economics decision of demonetisation and the ham-handed execution of the GST. Instead, they are fixing the supply-side; it is like giving someone a foot massage who is suffering from a migraine headache.

By appropriating Rs 1.76 lakh crore from the RBI and giving it as a tax bonanza to the corporate sector the government missed an opportunity to boost public expenditure and increase MNREGA outlay and help the MSME sector that would have augmented demand. Instead, most likely industry will absorb the higher earnings as retained profits given the fact that capacity utilization is at a mere 75%.

Productivity growth does not happen because of mere surpluses, they are a consequence of technological upgradation, talent enrichment, and creative innovation etc. That is why despite the RBI dropping repo rates, it has had negligible impact on fresh investments which are at a 16-year low. The government, both myopic and incompetent, transferred its own obligations to the business community that is unlikely to have any material impact even in the medium term.

In the long-term, of course, we are all dead. India’s GST collections are at a 19-month low signalling slumping consumer purchasing power. And by October end, India was already at 93% of its fiscal deficit. Unless there is the dissembling window dressing of data, our fiscal profligacy will only exacerbate further.

The National Democratic Alliance has lived up to the jibe of being a ‘Suit Boot Ki Sarkar’. One reason why India lags behind in GDP growth is the high inequality in India where roughly 1% of Indians own 60% of its wealth. By keeping GST rates high we have aggravated the woes of the ordinary people and the middle class; indirect taxes are regressive in nature.

Our ranking in Global Hunger Index (102 out of 119) and Human Development Index (130 out of 189) continues to be deeply alarming. Unemployment means a humongous waste of human resources; the Modi government has destroyed India’s demographic dividend.

Our literacy rate at 71% is lower than that of Rwanda and Congo because new investment in education has dwindled. We have thrown away our competitive advantage. The cost to society of wasted human resources in the prime of their health and absorption of knowledge and skills capacity is immeasurable.

While Indians have become poorer and are worse-off than before, the BJP has become rich. Look at the money they get in Electoral Bonds, monopolizing 95% of the funds received. It is a government of the 1% by the 1% for the 1% clearly catering to big business, campaign finance donors and rent-seekers ( one industrialist got a sweeping mandate for several domestic airports at one shot) .

The bottomline is that the Indian economy is like sky-diving from a height of 36,000 feet above sea level without a parachute. It is a free fall. But a frosty finance minister seems to say half-way to the fall to perdition that it is ‘so far, so good’. The grass on landing unfortunately will not be a green shoot. -APP/AFP