Govt determined to provide house to every homeless person: PM
5 May, 2019 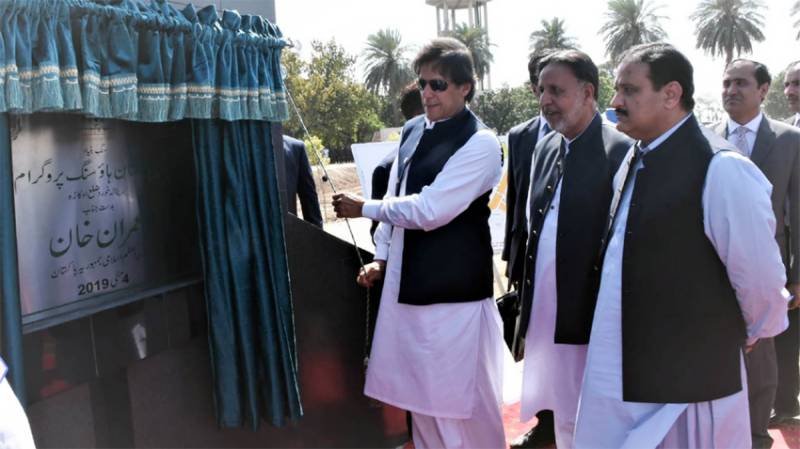 Prime Minister Imran Khan performed the groundbreaking of Naya Pakistan Housing Scheme in Renala Khurd near Okara today. Addressing the gathering on the occasion, the Prime Minister said that despite difficult economic situation, the present government has embarked upon the project to construct five million houses in its five years tenure. Imran Khan said the private sector will invest in this mega project while the government will play the role of facilitator. He said several foreign companies are evincing great interest for investment in the housing sector.

The Prime Minister was confident that the project will gather pace with each passing year as Naya Pakistan Housing Authority has been established and all the hurdles in the way have been removed.He said it is his dream to provide house to each homeless person. The Prime Minister said we are executing difficult projects which the previous governments failed to undertake. He said the housing project will enable the youth to establish construction companies. Prime Minister said that civilized society care for the deserving people. He said that Hazrat Muhammad pbuh laid foundation for a welfare state at Madina. He said that model of Riasat e Madina was based on sentiments of Care and even animal rights were protected in Riasat e Madinas

He said that houses will be provided to less income segments of society through mortgage system. He said that construction in less time is possible through use of new Chinese technology.

Imran Khan said that a Special Desk has been setup to facilitate foreign investors in the housing scheme.

Prime Minister slums will be converted into flats where people will have access to basic amenties including water, electricity and sewerage.

He felicitated Punjab Chief Minister and his team on successful completion of housing policy.

Addressing the ceremony, Punjab Housing Minister Mian Mehmood ur Rashid said that after Renala Khurd, work on Housing Project is also in progress at Chishtian and Lodhran.

He said that soon construction of one hundred and fifty thousand houses will begin in ten major cities of Punjab including Lahore, Faisalabad, Sialkot, Multan, Jhelum, Sargodha, Bhakkar, Mianwali and Khushab.

He said that twenty houses each will be allocated for widows and family members of martyrs in every Housing Project.

Punjab Housing Minister said that all necessary facilities including schools and hospitals will be available at these Housing Projects.

Prime Minister Imran Khan said foreign investment and creation of wealth will help Pakistan getting out of economic crisis and to achieve prosperity.

He said that the only way to take country out of hard economic situation is to attract foreign investors. He said that increase in investment will create new job opportunities.

He said red tapism, unnecessary delays and corruption are main obstacles in the way of doing business in the country.

Imran Khan said this is first phase of JW Forland car plant in Pakistan and in subsequent phases complete manufacturing of vehicles will be done in the country.

The Prime Minister said the electric cars to be manufactured in future will help resolve the pollution problem in Lahore and other big cities of the country.

He said the government will receive a tax of 30 billion rupees after the complete expansion of the project. He expressed hope that these vehicles will be exported out of Pakistan earning valuable foreign exchange for the country.

Addressing a ceremony at Aitcheson College in Lahore this afternoon, the Prime Minister said most people are unaware of their abilities.

Imran Khan said heavy responsibility lies on the shoulders of students of this college as they are blessed with best facilities.

The Prime Minister said half of Pakistanis live under the poverty line and it is the privileged classes that need to look after their poor countrymen.

Imran Khan said Quaid-e-Azam Muhammad Ali Jinnah was the most successful barrister in his time but he struggled for forty years for an independent homeland for Muslims of India.

Due to his service and sacrifice, he will always be remembered forever.

He said that history registers only those persons' names, who are dedicated for the service and betterment of the humanity.

The Prime Minister said that the great philanthropists and social workers like Ghanga Ram and Gulab Devi are still alive in the hearts of the people of Lahore due to their sincere welfare and indiscriminate service of the people.

He said that the champion is not who wins, rather, the real champion is the one who is not worried from losing and handles the bad situation.

Earlier, the Prime Minister inaugurated the modern electronic score board at the cricket ground of the college.

He said the curse of corruption has not only inflicted irrepairable damage to the economy but also destroyed the institutions, affecting the lives of the common man. The Prime Minister said corruption and development can not go together. Imran Khan stressed that elimination of corruption and indiscriminate action against corrupt elements should be taken as a mission. He assured the government will extend full cooperation in this regard.

Addressing inaugural ceremony of Picture Wall of Shahi Qila in Lahore this evening, he said national heritage is a source of pride and it reflects the richness of civilization. He said Pakistan is endowed with landmarks of rich Mughal Empire and Indus civilization.

Imran Khan said our cultural heritage is an asset for the generations to come. He said by not paying attention to preservation of our heritage, we have lost a lot of revenue potential which could been earned through tourism of historic sites.