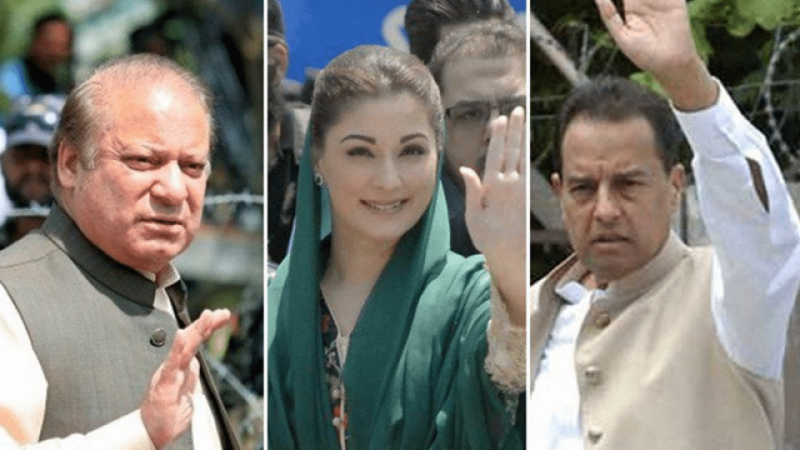 ISLAMABAD: The accountability court dismissed Tuesday the miscellaneous petition, submitted by the former prime minister Nawaz Sharif, requesting for final arguments in all the three references against the Sharif family to be heard together.

"You may challenge this verdict in the high court," remarked Accountability Judge Muhammad Bashir after dismissing the petition. He added that till that time the cross-examination of Zia will continue.

Moreover, National Accountability Bureau (NAB) Deputy Prosecutor General Sardar Muzaffar Abbasi, while presenting closing arguments in Avenfield properties case, remarked that the Supreme Court had ordered for the references to be wrapped up in the next six months, adding that there was also a deadline to file the references.

"Nawaz was declared ineligible after the July 28 verdict of the Supreme Court of Pakistan. The suspects were indicted on October 19, 2017, while supplementary reference was filed on January 22, 2018," he pointed out.

"So far, statements of 18 witnesses have been recorded in the Avenfield reference," he said, adding that the prosecution didn't take back the name of any witness. "The suspects have failed to prove their innocence in the case."

"NAB brought Gulf Steel Mills, Qatari letter in all the references,” he said, adding that the witnesses in the references are also the same.

“The final arguments should be postponed till Wajid Zia and investigating officer record their statements in remaining two references,” the petition states.

All three references have been formed on the basis of Panamagate Joint Investigation Team report, which was ordered by the apex court to probe assets of the Sharif family, Hashmi added.

Nawaz left the court shortly after the filing the petition.

Haris remarked: “It would've been better if all three references were heard together."

Responding to this, the NAB prosecutor pointed out that the arguments in all three references cannot be heard together. “The defense counsel had misled the court and is now engaging in delay tactics,” he said.

Accountability judge Muhammad Bashir then inquired when will Khawaja Haris complete the cross-examination of Wajid Zia, to which he responded: “will try to complete it by Tuesday”.

The judge then postponed the cross-examination till June 11.

Moreover, the judge also remarked that he would write a letter to the Supreme Court requesting another extension to wrap up corruption references against the Sharif family.

The SC in the July 28, 2017, Panamagate verdict, while disqualifying Nawaz Sharif from the post of prime minister, had originally set a deadline of six months which ended in mid-March but was extended for two months after the judge requested the apex court.

Later, the trial court's second plea for a deadline extension was approved by the Supreme Court which to both sides to finish the corruption cases by June 9.

The two brothers, based abroad, have been absconding since the proceedings began last year and were declared proclaimed offenders by the court. Their trial in the high-profile corruption case has been separated from other family members' owing to their continued absence,