Indian Independence Day to be observed as Black Day in Occupied Kashmir
5 Aug, 2016 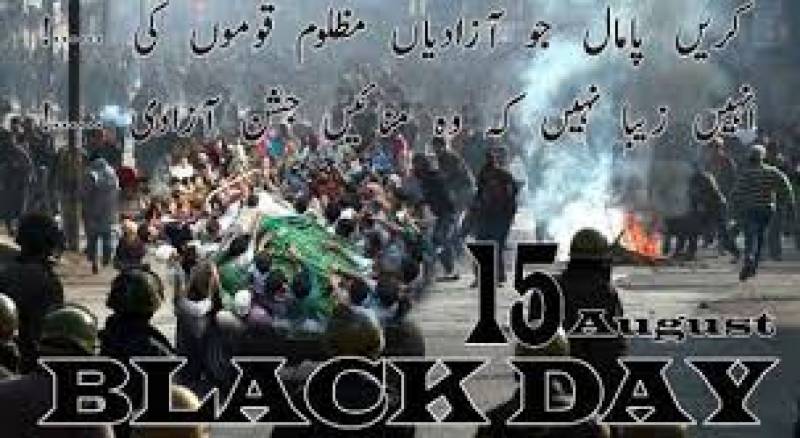 MIRPUR (AJK) (APP) : Jammu & Kashmir people dwelling either side of the line of control and rest of the world, would observe India’s Independence Day on August 15 as black day to reiterate full hatred against India besides to condemn the Indian imperialism for constantly denying Kashmiris birth right to self determination besides to apprise the external world of the continued Indian atrocities unleashed against the people in occupied Jammu & Kashmir fighting for liberation of the state from the Indian rule.

The observance of the scheduled Indian Independence day as black day is also aimed at to express extreme indignation and hatred against the Indian imperialism for forcibly keeping bulk part of the State in her unlawful and forcible occupation since last 69 years besides to condemn the ongoing fresh wave of state terrorism and genocide of innocent kashmiris in the Indian held Kashmir valley, organizers said.

“Anti-India rallies followed by protest demonstrations in all small and major cities and towns at both sides of the LoC, will be all mark of the day”, National Events Organizing Committee Mirpur District Chairman Ch. Amjad Iqbal told APP here on Thursday.

“Participants of the protest rallies will wear black bands around their arms as a sign of hatred against India , according to the organizers of the special black day programs. Black flags will be hoisted atop the buildings by the protesting Kashmiris at both sides of the LoC”, according to the NEOC Chief.

In Azad Jammu & Kashmir, anti-India rallies will be staged and processions will be brought out in all small and major cities including AJK’s capital city of Muzafferabad and all other nine district headquarters of Mirpur, Kotli, Bagh, Bhimbher, Palandri, Rawalakot, Haveili, Hattiyan Bala and Neelam valley by the people belonging to walks of life to reiterate severe hatred against the Indian imperialism.

In Mirpur, major protest rally to observe the Indian Independence day as black day on August 15 at 11.00 a.m will be held at the District Courts premises under the auspices of the National Events Organizing Committee with the coordination of various public representative organizations representing the people of all walks of life.

People from all shades of public opinion will attend.

Participants of the rally will bring out a procession and carry black banners besides parading through major city street to express severe indignation against the increased Indian brutalities and human rights abuses in occupied Jammu Kashmir and in favour of Kashmiris birth right of self determination.