He said experts were yet to determine the amount of explosive material used in the attack but said the target was a census team.

"The chief minister has called an emergency meeting of all security personnel.

The Inspector General Police and provincial intelligence representatives will be part of the meeting," said the provincial government spokesperson.

Khan confirmed four military personnel and two civilians were martyred and 15 individuals were injured in the blast. "Two of the 15 injured are in critical condition," he said.

Punjab Police spokesperson Nayyab Haider said "We suspect the suicide bomber was on foot. He came from behind the vehicles and detonated his vest." 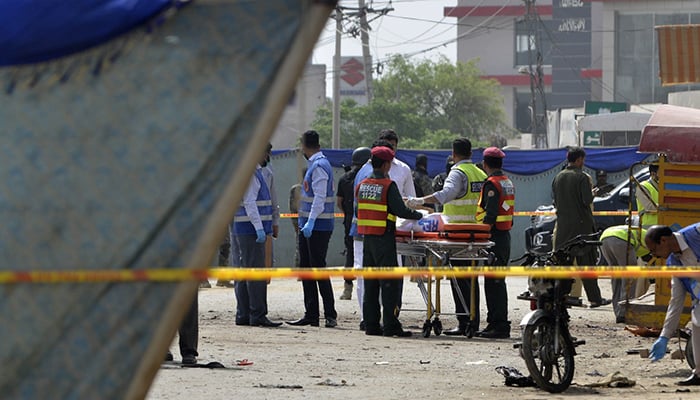 Photos from the scene of the attack showed two vans and a motorcycle which were damaged by the explosion.

"I was standing a hundred steps away from the incident," an eyewitnes said. "I called 112 [Emergency Ambulance Service] which reached the site 20 minutes later."

Rescue teams reached the site soon after the incident, as security personnel cordoned off the area.

The injured driver of one of the vans was later taken into custody after he was shifted to the hospital, sources said. The driver was identified as Usman.