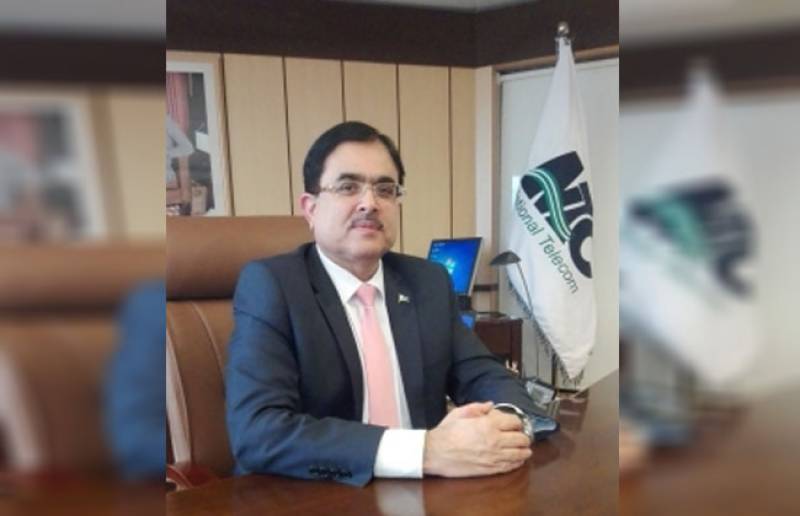 "Laying of optical fiber cable (OFC) to start connectivity from Shikarpur to Gawadar along the new Motorways under CPEC, Cross Border Connectivity with Iran, China and Afghanistan and vice versa is also in progress," he said while taking to APP.

He said "Despite the downward trend in use of fixed line telephone in the country, NTC has been able to increase its fixed line subscriber base by 6 percent and broadband subscribers to 36 percent which record growth and performance,"..

He said, due to migration of TDM to IP based NGN network, NTC has been able to develop 54,000 telephone sets and 6,000 broadband in a record one year.

To a question he said, the establishment of first National Data Center is the realization of the vision of the Prime Minister which is spearheaded by the Minister for IT and her team.

"The transformation to "Digital Pakistan" is vision of Prime Minister of Pakistan and priority agenda of MoIT with special emphasis on `Bridging Broadband Divide' to enable socio-economic development and to ensure transparency and openness in the working of government functionaries," she said.

The chairman said, policies of the last three years at NTC have earned countrywide acclaim and acknowledgements and has resulted in a turnaround from a loss making entity few years ago to a forward looking, customer oriented and profitable Govt organization.

He said, prior to this particular development, that is, National Data Centre, NTC owing to its innovative services and products such as multi-service data network, switches, digital cross connect and Internet services has been providing its subscribers Intranet, email, webhosting, virtual private networking, video conferencing, DSL and other customized services at par with any world-class telecom service providers.

This National Data Center, however, he said, is the first of its kind for the government. It is basically a Modular Scalable Cloud Computing Data Center, which will be gradually expanded through self-generated revenue, with self-sustainability being its special characteristic.

It is a tier-3Data Center, powered by cloud computing, will provide services like Infrastructure as a Service (IaaS), Platform as a Service (PaaS), Software as a Service (Saas), and Virtual Desktop Services (VDS) etc. It will help the government in facilitating e- health, e-commerce and e-governance.

Viqar Rashid Khan said that with this important milestone, which is aimed at providing next-generation value added services to various arms of the government, NTC is going to enable its customers to join the swim in terms of future telecom technologies.

To a question he said, NTC was going in to financial loss and development was stagnant.In order to compete in the competitive market under deregulated environment specially in the circumstances when other telecos are entering in to NTC domain, NTC adopted a "Proactive and Reach Out Policy" which in turn has made the entire NTC team more responsive, more performance driven and more result oriented.

After five years, he said, NTC has been able to turn the tables on its budgetary loss by earning net profit before tax to the tune of Rs.257 million for Financial Year 2015-16, showing a total recovery of Rs.356 million after adjustment of Budgeted loss.

There was a financial growth of 359 percent during last financial year (2015-16), which is a record performance in the history of NTC and in any Public Sector in Pakistan.

He said, NTC within last two years, had been able to execute and complete over 87% of its ADP projects in 2014-15 and 76% in 2015-16 which is record growth in any Public Sector Organization.

Never in the history, NTC completed more then 25- 30 percent of its ADP projects, he reminded.

"We have also pursuing different government departments for provision of mobile financial services under Public Private Partnership" he added.