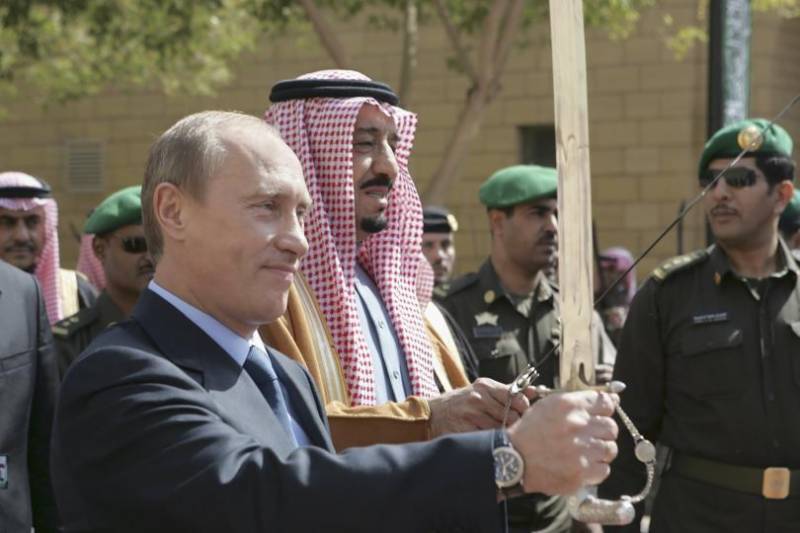 RIYADH/MOSCOW: The leaders of Saudi Arabia and Russia, the world’s biggest oil exporters, are expected to discuss cooperation on oil production and differences over Syria and Iran on Thursday during the first visit to Moscow by a reigning Saudi Monarch.

A slew of investment deals, including on a liquefied natural gas project and petrochemical plants, could also be signed during King Salman’s trip and plans for a $1-billion fund to invest in energy projects are likely to be finalised.

The visit, including talks in the Kremlin with President Vladimir Putin, reflects a rapid deepening of ties between Russia and Saudi Arabia, driven by a mutual need to stem a drop in global oil prices.

The two countries helped secure a deal between OPEC and other producers to cut output until the end of March 2018, but back competing sides in Syria’s civil war.

“The Saudis want help on Iran, and Russia wants trade and investment,” said Mark N Katz, an expert on Russia-Middle East relations at George Mason University. “In the Saudi mind, they’re definitely linked and the Russians are going to try to separate these.”

Billboards have been erected on the road from the airport to central Moscow welcoming King Salman in Arabic and Russian.

His son, Prince Mohammed bin Salman, visited in May just before his elevation to crown prince, and in 2015 the countries’ sovereign wealth funds agreed to $10 billion in investments.

A business forum will include speeches by top ministers and the heads of state-owned energy giants Saudi Aramco and Gazprom as well as a presentation of Saudi’s Vision 2030 reform program, which aims to end the kingdom’s dependence on oil.

Moscow sees the trip as a payoff for its two-year-old intervention in Syria and recognition of its growing Middle East clout.

“Even 12 months ago, Riyadh was highly critical of Russia’s involvement in Syria and the relationship looked as frozen as ever,” said Chris Weafer, senior partner at economic and political consultancy Macro-Advisory Ltd.

“Today that has changed 180 degrees. Both countries now see political and economic advantages from a closer, albeit pragmatic, relationship. This visit is intended to make sure it stays on track.”

Discussion of Syria is likely to focus on what the country will look like once Islamic State is defeated, Assad’s future, what peace talks between Saudi-backed opposition activists and Damascus can achieve and the creation of new de-escalation zones. The king may also seek assurances that Iran will not have a permanent role in Syria.

Kremlin spokesman Dmitry Peskov said Moscow hoped the king’s trip would breathe life into a relationship with huge potential and was interested in maintaining dialogue with Riyadh “about the Middle East and Syria in particular.”

Any discussion of the oil market and the efficacy of moves to prop up prices by cutting supply will be closely watched.

The oil price fall in the last three years has overstretched both producers’ budgets, making an extension of joint cuts beyond March 2018 more likely.

Moscow said last month it had discussed with Riyadh extending the deal but no specific decisions had been made ahead of a November 30 producers’ meeting in Vienna.

Russian Energy Minister Alexander Novak said in an interview broadcast on Monday that the planned $1-billion fund to invest in energy projects was part of efforts to strengthen cooperation in oil, gas, electricity, renewable energy and other projects.

Russian Economy Minister Maxim Oreshkin said on Tuesday investors were interested in a nuclear energy plant Saudi Arabia wants to build and Saudis would be offered investment opportunities including in shipping company Sovcomflot.

A Russian energy source said a memorandum of understanding (MoU) was expected to be signed between Novatek and Saudi Arabia on a liquefied natural gas (LNG) project, known as Arctic LNG-2 that aims to start up in the 2020s.

He said details were still being discussed. Russia would like Saudi Arabia to become a shareholder in the project but the source said there were also other roles the kingdom could take.