Pakistan delivers the right message to US over new South Asia Policy
4 Oct, 2017 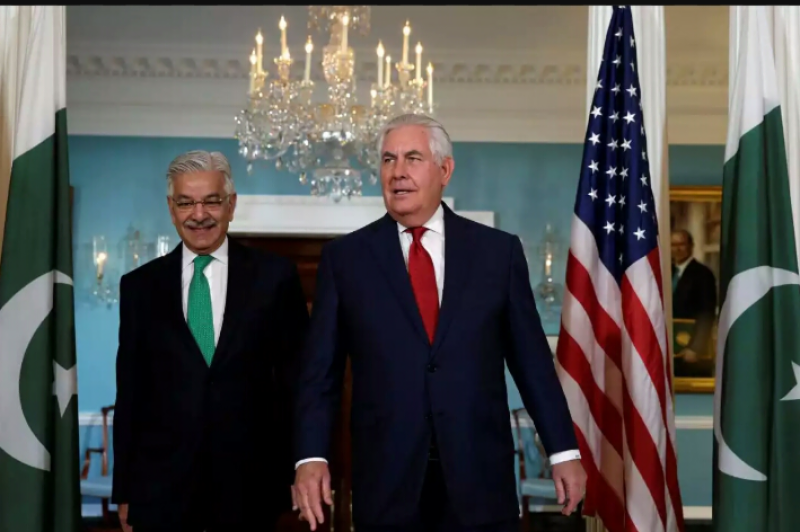 WASHINGTON - Foreign Minister Khawaja Asif raised the issue of United States's South Asia Policy with Secretary of State Rex Tillerson and told him that Islamabad has pursued a zero-tolerance and indiscriminate approach in its campaign against "all terrorist and militant groups", read a statement issued by the Foreign Office on Wednesday.

Pakistan and the US shared a common desire for peace and stability in Afghanistan and the region at large, the foreign minister maintained.

The minister pointed out that Pakistan has been making achievements in its war against terrorism.

"In contrast to other countries, the incidences of terrorism in Pakistan has seen a marked decline — with a salutary impact on economic and commercial activity," Asif was quoted as saying.

"This was made possible because Pakistan has pursued a zero-tolerance and indiscriminate approach in its campaign against all terrorist and militant groups."

The foreign minister informed the US Secretary of State about the strong public reaction in Pakistan regarding the pronouncement of the US Administration’s South Asia Policy, which Asif said was based on "inadequate recognition of Pakistan’s sterling contribution in the fight against terrorism."

In addition to huge human and material cost incurred by Pakistan, Asif said, "Our cultural ethos as a moderate state had suffered due to protracted instability in Afghanistan."

Secretary Tillerson acknowledged and appreciated the sacrifices rendered by Pakistan in the struggle against terrorism, said the press release.

He agreed that cooperation between Pakistan and the US in Afghanistan was crucial to achieving durable peace and stability in the region. "Pakistan’s interests and concerns will be accommodated since its role was critical to President Trump’s South Asia Strategy," he was quoted as saying.

"The future stability of Pakistan was an important element of the Strategy."

Khawaja Asif reiterated Pakistan's position on the need for an Afghan-led and Afghan-owned political approach to achieving peace and stability in Afghanistan.

He conveyed Pakistan's concerns with regard to ungoverned spaces within Afghanistan, from which attacks against Pakistan continued to be planned and carried out.

The minister urged the US to take note of the gross human rights violations being perpetrated by Indian security forces in held Kashmir. "Peace in South Asia would remain out of reach until the resolution of all longstanding disputes, including the core dispute of Jammu and Kashmir," he said.