How Pakistan - India lobby clashes at Washington over F-16 sales to Pakistan
4 Oct, 2017 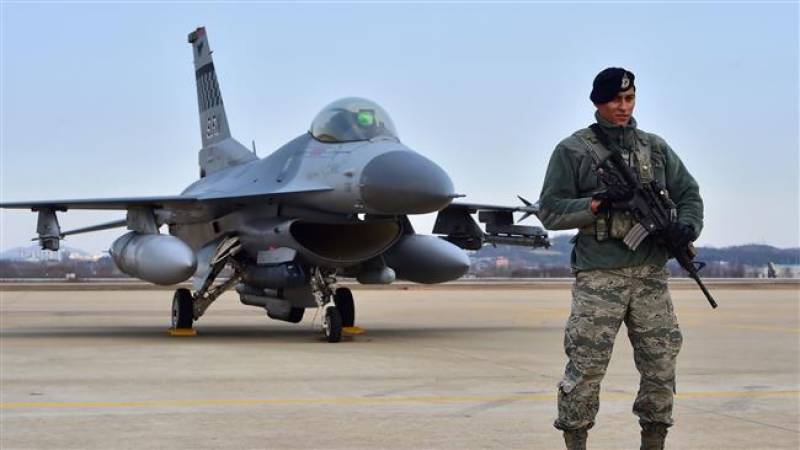 WASHINGTON: The lobbying firm that campaigned to get F-16 fighter jets for Pakistan in 2016 also advocated for India to block the proposed sale, claims a new book by a former US senator, Larry Pressler.

The book Neighbours in Arms details the arms race between India and Pakistan, and was published recently by the Penguin Random House in India. Excerpts from the book were published in an Indian digital magazine, Quartz.

Mr Pressler was also the sponsor of the “Pressler Amendment”, which banned most economic and military assistance to Pakistan over its nuclear programme.

The book claims that Lockheed Martin, a US company which manufactures F-16 fighter jets, had hired a Washington firm — the Podesta Group — to lobby for defence and aerospace sales to various potential buyers, including Pakistan.

“It is highly likely that they [the firm] assisted in the overall effort to push through the sale of F-16s to Pakistan,” writes the former US senator while noting that in February 2016, the State Department and the Department of Defence announced that they were approving a sale of eight more F-16s to Pakistan, which was “clearly a victory for Lockheed Martin”.

However, under the terms of the new deal, sale of the additional F-16s was to be subsidised by the US government. The subsidy was to come from the US Foreign Military Funds (FMFs), which is used to facilitate sales of US military equipment to foreign countries.

The Indian government protested both the sale and the subsidy, claiming that the nuclear-capable fighter jets could be used against them.

The Indian embassy in Washington summarily deployed their army of lobbyists to block the deal. “So, who has been lobbying on their behalf since 2010? Once again, the Podesta Group,” writes Mr Pressler.

According to the book, records submitted to the US Congress show that the Podesta Group received $700,000 from India for work they performed in 2016.

“Conventional wisdom says that a firm that is representing India cannot very well represent Pakistan at the same time. But in the world of the Octopus (military-industrial complex), the same firm represents competing interests and it is all legal,” Mr Pressler points out.

The book notes that the power and pressure of the Indian embassy’s lobbying firm produced results and a week after the State Depart­ment’s announcement of the planned subsidised F-16 sale to Pakistan, Kentucky Republi­can Senator Rand Paul introduced a joint resolution to halt the sale.

The sale was approved but without the FMF subsidies, forcing Pakistan to concede that it could not afford to pay full freight for the eight fighter jets.

Lockheed Martin also complained about the news, saying that it would not be able to afford to keep its F-16 production line in operation without the sale. It also said, incredulously and ironically, that it planned to move the entire F-16 production line from Texas to India.

In an interview to a Pakistani newspaper, the vice president of Lockheed’s F-16 programme, Susan Ouzts, said that In­dian Prime Minister Naren­dra Modi had expressed interest in the planes.