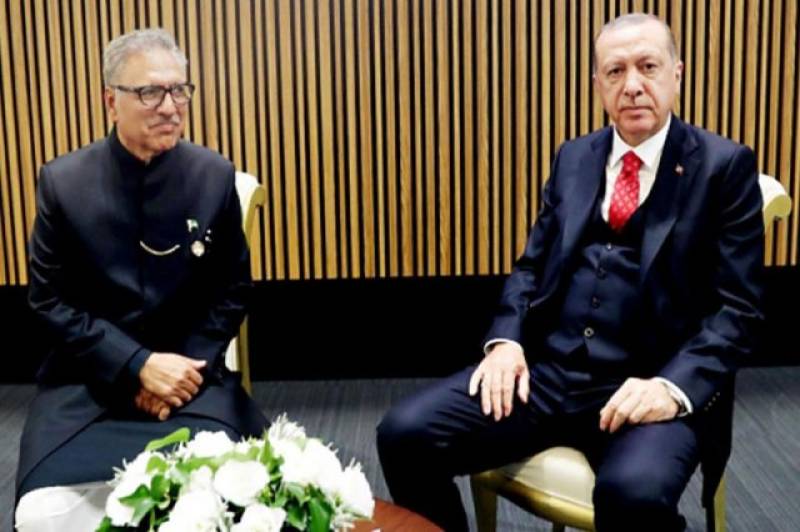 "During my recent visit to Istanbul, I talked to Turkish President Tayyip Erdogan on the FTA. Seven meetings had been held in the past, but the FTA could not be finalized because of certain concerns shown by Turkey. Now, these hindrances will be removed and the FTA will be finalized soon," he added.

The president was speaking at the launching ceremony of 16th International "My Karachi : Oasis of Harmony" exhibition-2019 at a hotel here. The 3-day international trade event will start from April 5, 2019.

The Karachi Chamber of Commerce and Industry (KCCI) has been organizing the international exhibition every year since 2004 to project Pakistan’s soft image and potential before the world ; especially the West where negative propaganda about the country was at its peak.

The president said his Turkish counterpart agreed that more serious and concrete steps were needed to be taken for increasing bilateral trade, which had decreased to $600 million from $1billion per year.

He said the Turkish government, business community and the people in general gave great importance and respect to Pakistan and its citizens. Turkish investors were keen to invest in various sectors in Pakistan, he added.

Four Turkish companies, he said, were ready to bring $1.5 billion investment to Pakistan. However, there were certain issues needed to be addressed before their arrival, he added.

Albania, who is a member of European Union, also expressed deep interest in Pakistan's goods trade to European countries through Albania after some value-addition there.

Dr Alvi assured that the Pakistan Tehreek-i-Insaf leadership would honour its promises and commitments which it made with the trade and industrial community before the general election. Besides better law and order, the government was going to take important and long-lasting measures to bring down the cost of doing and ensure ease of doing business.

"At least, I shall fulfill my promises and will make every effort in this regard," he said.

He said the PTI government was taking concrete measures on short and long terms to provide a business friendly environment, including security to life and property of the business community and the people in general. After maintaining law and order in the country, he said, elimination of corruption was imperative to attract local and foreign investment.

The president paid tribute to the Pakistan Army and other law enforcing agencies for bringing peace and security in the country.

He said Pakistan had now economically become a place of attraction for the world. There were potential areas for local and foreign investment and the government would provide a business friendly environment, he added.

He said after the PTI coming into power, tourism in the country had significantly increased. This year, he said, around 2.5 million tourists had visited different sites of Gilgit and Baltistan against 5,000 three years back.

For putting the country on the track of rapid progress and development, he said it was necessary to promote a sense of ownership in the common man. It could be done by equalization of benefits ( social and economic opportunities) for the poor of the country, which was the prime responsibility of the state and the elite, he added.

"In the new Pakistan, every citizen shall live a respectful and secured life," he affirmed.

Dr Arif Alvi emphasized on promoting the spirit among the people to maintain physical, spiritual and environmental purity. It was one of the fundamentals of Islam. For bringing reforms in the society, it was necessary to strengthen and promote the Islamic values, he added.

"We have to take Karachi out of environment pollution," he stressed, adding that the people of the mega city could play a better role to keep it clean and green.

Prime Minister Imran Khan, he said, had already launched a massive "Clean and Green Pakistan" programme, under which some 10 billion saplings would be planted across the country.

He said the PTI government realized the importance of Karachi as it was the hub of trade and industry, and the country's heart. A prosperous Karachi was must for a prosperous Pakistan, he added.

The president said the government was taking both short and long term steps to address the issues of shortage of water for drinking and industrial use, and power shortfall, besides strengthening the city's infrastructure to boost trade and industrial activities there.

The industry's requirement for water in the city could be met through setting up plants to treat sewage water along with desalinating sea water, which would also be cost effective, he said.

About the under-construction Green Line project in Karachi, he said, it would be operational within next few months.

The president praised the KCCI's role in promoting trade and industry in the city, and for the welfare of the business community.

He also assured to play his role in resolving the issues between the KCCI and the Federation of Pakistan Chambers of Commerce and Industry so that the both trade bodies could play more effective roles for the prosperity and development of the country.

The KCCI leadership assured full support to the PTI government's all positive steps and policies.