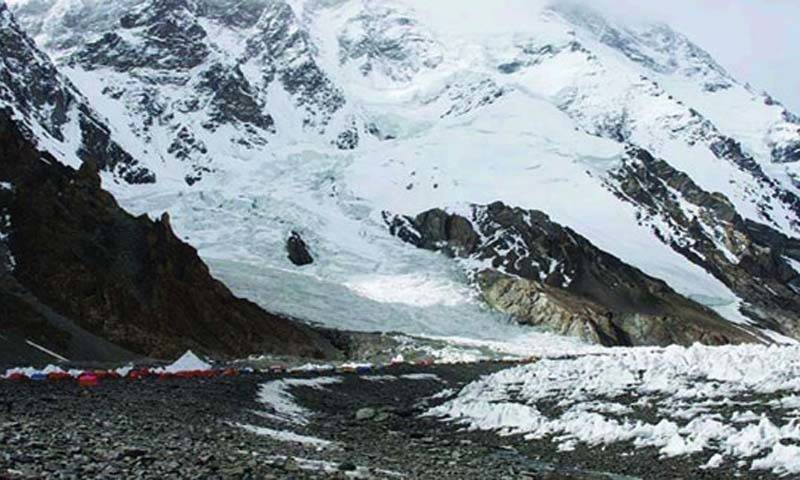 KHUNJERAB PASS: This border outpost on the Karakoram Highway, slashed through the glacier-strewn Karakoram mountains to join China and Pakistan by road, boasts a new world record: it has the world’s highest automated bank teller machine.

But the ATM is just one of the changes happening along the high altitude highway, which is increasingly a tourist attraction after a major upgrade as part of a $54 billion Chinese-funded effort to boost transport and trade links between the two countries.

At the border post, the highest paved international crossing in the world, more than a dozen diesel semi-trailer trucks now crawl over the pass each day, and hundreds of vehicles crowded with tourists from Pakistan and China clamber up for photos and picnics.

But experts say all this exhaust-spewing traffic and increasingly heavy tourism threatens the fragile Khunjerab National Park, which surrounds the high-mountain border post, and particularly its glaciers, already melting faster as a result of rising temperatures linked to climate change.

The highway upgrade, part of the ambitious China-Pakistan Economic Corridor (CPEC), has two impacts — one is positive and the other negative, said Qamaruz Zaman Chaudhry, the author of National Climate Change Policy.

It will bring in much-needed infrastructure. But the carbon emissions and the soot going into the atmosphere will definitely increase and mountain glaciers will melt. “We need to do a comprehensive study on the impacts and then develop a strategy,” he said.

Pakistan has more glaciers than any other country outside the polar region more than 7,200 in the Karakoram, Himalayan and Hindukush ranges, according to the Meteorological Department. They feed the Indus River system, the country’s water lifeline. But data gathered over the last 50 years show that all but around 120 of the glaciers are showing signs of melting, meteorological officials said.

Warming temperatures are to blame for much of the melting, but so-called black carbon soot released from diesel vehicle exhaust, factories, open fires and cook-stoves also is to blame, experts say.

The wind-blown pollutants settle onto glaciers, darkening them and reducing their ability to reflect away sunlight, which leads to a faster rate of melting, said Ghulam Rasul, Director General of the Meteorological Department.

He said a 2013 sampling of five glaciers in northern Pakistan had shown that winds from India were blowing black carbon, largely from coal-fired power plants and steel industries, onto the lower reaches of Pakistan’s mountain glaciers.

But because the particles tend to be heavy, at a higher level the glaciers are not tainted, he said.

That may be changing, however, as the newly-expanded China-Pakistan highway brings an army of vehicles through Pakistan’s high mountains each day.

“Now our own development will be contributing to the melting,” Chaudhry noted.

The Karakoram Highway has been around since 1982, but the Chinese-funded upgrade which opened in 2015 has turned a once treacherous track into a 15-foot-wide paved road.

A series of tunnels, cut through the mountains, have reduced the driving time to the Khunjerab Pass from Gilgit from eight hours to four hours.

Now trucks are pouring over the border, laden with Chinese goods and equipment headed to Sost, the first border town on the Pakistani side, and then further down the 1,300km highway towards the port of Gwadar.

So far, there are around 12 to 18 trawlers a day coming across five days in a week. They are expected to go up to 100 a day, said Shabbir, a hotel owner in Sost. “We are also expecting more Chinese tourists,” he said.

The highway upgrade is just part a huge Chinese investment push into infrastructure in Pakistan, including a series of new coal-fired power plants under the CPEC project.

At the Khunjerab Pass, what once was verdant grassland covered with patches of purple wildflowers is giving way to muddy, tourist-trampled grass. A large new parking has been built alongside the road to accommodate tourists. Formerly pristine streams are accumulating plastic garbage.

On the way up to the pass, several glaciers including the Batura, one of the world’s longest outside polar regions, and the Passu reach down to the highway. Seven glaciers emerge from Passu peak, which towers above the highway.

There is definitely increased melting at the terminus of these glaciers and they are thinning, said Ghulam Rasul. Melting of the Batura glacier has led to a large lake forming next to the highway in recent years.

In 2008, the melting Passu glacier, above the highway, led to a glacial lake outburst flood, which blocked and damaged the road prior to its upgrade.

Definitely, the new infrastructure projects, including the (highway) itself, will be threatened by the increased melting, Chaudhry said.

Rasul, however, said he was confident that the increased climate-changing emissions from the expanded highway would be absorbed by ambitious efforts now under way to replant forests in Pakistan, which had seen heavy deforestation in recent decades.

He also has faith the world will cut climate-changing emissions, as agreed under the Paris climate deal in 2015, sufficiently to prevent the worst impacts of climate change.

There is no big danger to Pakistan, he predicted. “Our huge ice reserves in the high mountains will last for millennia.”