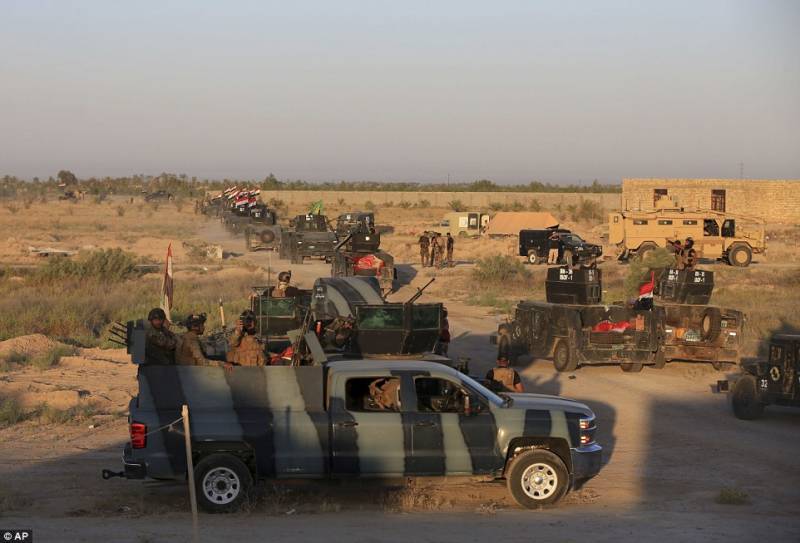 BAGHDA: (APP) Iraqi forces advanced into east Mosul on the 19th day of the operation to retake the jihadist-held city. Here are some facts about the country's biggest military operation in years:

Where are the Iraqi forces?

Iraq's elite Counter-Terrorism Service pushed into the Al-Karama area of eastern Mosul on Friday, a few days after it and Iraqi regular army forces reached the outskirts of the city.

Soldiers have also advanced toward the northern edge of the city, while Kurdish forces have also gained ground north and east of Mosul in recent days.

The forces on the southern front -- including the Rapid Response Division, CTS's interior ministry counterpart, as well as police -- are currently aiming for Hamam al-Alil, a jihadist-held area about 14 kilometres (8 miles) from the southern outskirts of Mosul.

Iraqi Army enters into Mosul, the Headquarters of ISIS

The Hashed al-Shaabi, an umbrella group for pro-government paramilitary forces that is dominated by Iran-backed Shiite militias, are fighting southwest of Mosul in a bid to retake the town of Tal Afar, which lies between the city and Syria.

They have gained ground in recent days, but the western approach to Mosul remains largely open for now.

What is the US-led coalition doing?

The US-led anti-IS coalition is carrying out air strikes against the jihadists as well as targeting them with artillery. It has hit IS with some 3,000 bombs, missiles, rockets and shells since the drive for Mosul began on October 17.

But some Iraqi commanders have still complained that there are not enough strikes, and said they want the coalition to step up its campaign.

Most of the more than 7,000 coalition military personnel in Iraq are in advisory or training roles, but there are also those carrying out artillery strikes, as well as special forces personnel who have carried out raids against IS.

How are the jihadists responding?

IS has targeted attacking Iraqi forces with suicide bombers, mortar rounds and small arms fire, in addition to bombs hidden in houses, buildings and roads that make up an integral part of the jihadists' defences and still cause casualties even after they withdraw.

Inside the territory they still control, the jihadists are responding with the same brutality that has been the hallmark of their more than two-year rule.

Mosul residents told AFP that IS has forcibly gathered civilians in and around the city for possible use as human shields, confirming United Nations reports of similar kidnappings.

The UN has also said it has received reports that IS has executed nearly 300 people in the Mosul area since October 25.

The jihadists have also staged diversionary attacks in the northern city of Kirkuk and the western town of Rutba in attempts to draw attention and forces away from the Mosul theatre.

How are civilians affected?

As Iraqi forces advance, thousands of civilians have fled IS-held areas to escape both jihadist rule and impending fighting.

The US says up to one million people could be displaced by the battle for the city -- a major problem given that existing, under-construction and planned camps can only house about half that number.

The International Organization for Migration said on Friday that more than 22,000 people have fled to government-controlled areas since the Mosul operation began.

Displacement is especially difficult for rural farming communities, whose wealth lies in fields and livestock that they cannot take to camps.

The situation for displaced Iraqis will get even more difficult as winter rains and colder weather set in.