Qureshi asks PML-N to take parliament into confidence on change in parliamentary leadership
4 May, 2019 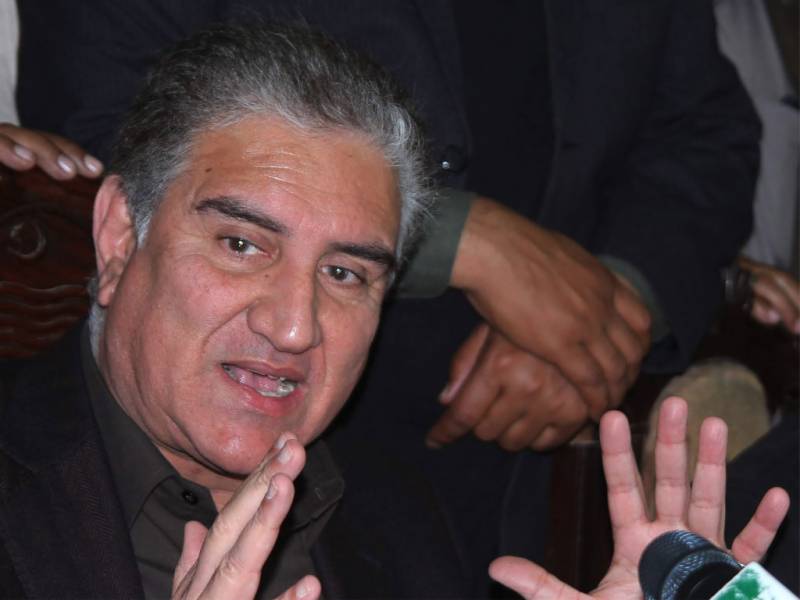 ISLAMABAD: Vice Chairman of Pakistan Tehreek-i-Insaf (PTI) Makhdoom Shah Mahmood Qureshi asked the Pakistan Muslim League- Nawaz leadership to take the parliament and masses into confidence regarding the changes in its parliamentary leadership.

Addressing a press conference here he said, “Will the leadership of Pakistan Muslim League-Nawaz like to take the parliament and people into confidence regarding reasons behind the recent change in the parliamentary leadership, and why suddenly such a change has been made, as members of their party are also in a state of shock.” The PTI vice president expressed the hope that rational answers to those questions would be given in the National Assembly’s session, scheduled on Monday.

Shah Mahmood said that senior leadership of the PML-N was also unaware of the recent developments in the party. “Only a gang of four was aware of the change at command of the party,” he said. He said that Raja Muhammad Zafar-ul-Haq and Mian Javed Latif had also expressed their surprise over the change in the party.

Shah Mahmood Qureshi said the gang of four or five persons was taking all the decisions and parliamentary party was unaware of those decisions.

He said that change of guard in the Pakistan Muslim League-N was their internal matter.

However, when there was a talk of change of Leader of the Opposition in the National Assembly, it became a significant issue.

The Foreign Minister questioned how Rana Tanveer Hussain could be the head of PAC when it had already been decided that leader of the opposition in the national assembly would take up that position.

Foreign Minister Shah Mahmood Qureshi said the Public Accounts Committee was an important body in the parliament and sudden reshuffling of its leadership would impact parliamentary proceedings.

He said that his party was not bound to accept the announcement made by PML-N about the PAC chairman.

However, he said consultation could be made on the issue and negotiations could be held on it.

He said that the decisions taken by the PML-N had also raised questions about the return of Shehbaz Sharif in near future.

The opposition leader was scheduled to return to Pakistan on May 7, but now the party was not in a position to give his return schedule.

He said there were rumours that Shahid Khaqan Abbasi would be made the leader of the opposition in the National Assembly.

He said, that the Pakistan People’s Party (PPP) had also expressed reservations on the PML-N’s decision to give the PAC chairmanship to Rana Tanveer.

He said that PPP Information Secretary Dr Nafeesa Shah in a TV programme had said that the PML-N leadership did not consult the PPP on the decision of Shehbaz Sharif quitting the PAC chairmanship To a question he said that Pakistan Tehreek-e-Insaf did not believe in any deal.

“I presented the confidence resolution in the meeting” he added. Responding to another question he said reshuffle in the federal cabinet was the privilege of Prime Minister Imran Khan.

He said that two-thirds of the majority was required to make changes in the country’s Constitution. “Neither the government nor opposition wanted presidential form of government in the country,” he added.