Pakistan Afghanistan and Turkey to have joint summit
4 Jan, 2019 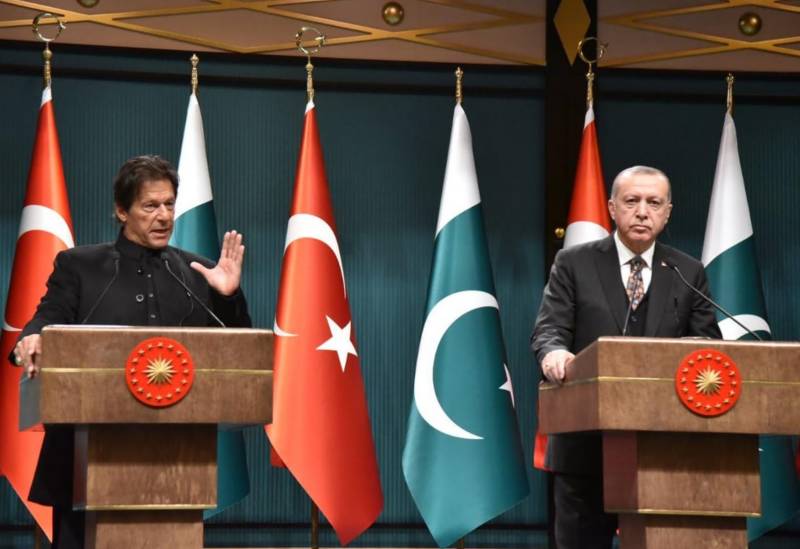 Addressing a joint news conference with Turkish President Recep Tayyip Erdogan in Ankara on Friday, he said Pakistan wants to learn from Turkey's experience in housing, health, and education sectors for the benefit of common people.The Prime Minister said close cooperation between Pakistan and Turkey for peace in Afghanistan will yield good results.

He said Afghanistan-Pakistan-Turkey summit will help restore tranquality in the war torn Afghanistan.

He said Pakistan is already extending its cooperation in bringing Afghan Taliban and the United States to the negotiating table for peace in Afghanistan.

Imran Khan said Pakistan wants cordial relations with all its neighbours, including India.

He said peace and stability are vital for economic development and it is not possible unless Pakistan and India sit together for a greater dialogue.

Prime Minister said India is avoiding talks with Pakistan on the pretext that it will not hold any dialogue till Islamabad stops supporting terrorism.

He said how things can improve without discussion.

Imran Khan said the real issue between Pakistan and India is Kashmir.

He said an indigenous movement for freedom has been continuing in Occupied Kashmir, which should not be transpired as terrorism.

Imran Khan said Pakistan stands with the international community to defeat the menace of terrorism. He joint efforts of regional countries like Iran, Afghanistan, Turkey, and Pakistan are needed to eliminate terrorism.

He said the people of Pakistan have inherited love for Turkey from their forefathers, who had overwhelmingly supported Turkey in its freedom struggle.

Prime Minister thanked the Turkish President for extending him and his delegation warm welcome and invited him to visit Pakistan.Speaking on the occasion, Recep Tayyip Erdogan said we have discussed bilateral cooperation in political, trade, and defence sectors. He underlined the need to enhance commercial and trade ties between the two countries.

Turkish President said Turkey and Pakistan enjoy warm and close brotherly relations, which are getting stronger with every passing day.Prime Minister Imran Khan was presented guard of honour upon arrival at Turkish Presidency in Ankara.