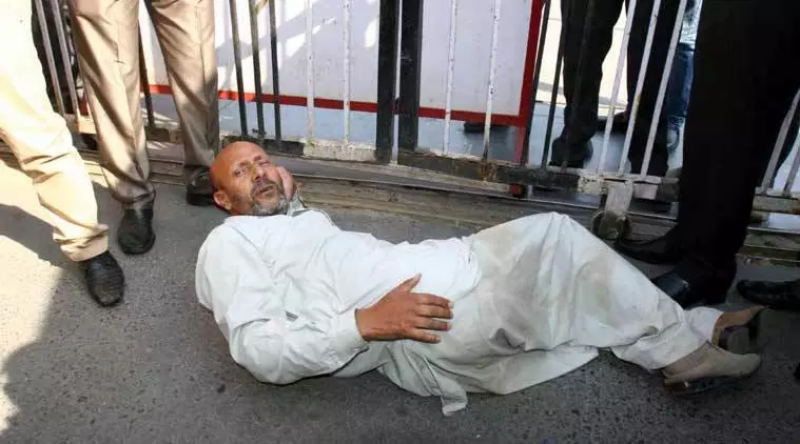 SRINAGAR - In occupied Kashmir, the Jammu and Kashmir Awami Ittehad Party (AIP) has condemned the police assault on its President and former member of the so-called Kashmir Assembly, Engineer Abdur Rasheed.

A spokesman of AIP in a statement issued in Srinagar said that such horrible and shameful attacks would not break the will of party cadres, as the party was committed to fight politically for right to self-determination, the birthright of the people of Kashmir.

He said that on Indian Prime Minister, Narendra Modi’s visit to occupied Kashmir on Saturday, Er Rasheed was put under house arrest throughout the day at his Jawahar Nagar residence as he had announced to protest against the visit. He said, “Late in the evening a heavy contingent of masked men in uniform forcibly entered the house of Engineer Rasheed and bundled family members including women and children in the kitchen.

Around twenty masked cops in presence of few guests on more than three occasions physically assaulted Engineer Rasheed and forcibly dragged him to police station Rajbagh.”

The spokesman said the shameless act is a desperate attempt to break the will and hurt self-respect of the party Chairman but such cheap tactics will fail as AIP is not an underground organization but represents sentiments, sacrifices and aspirations of the Kashmiri people.

Humiliating and harassing the family and dragging Engineer Rasheed speak volumes about the frustration, arrogance and misuse of power by the cops, he added.