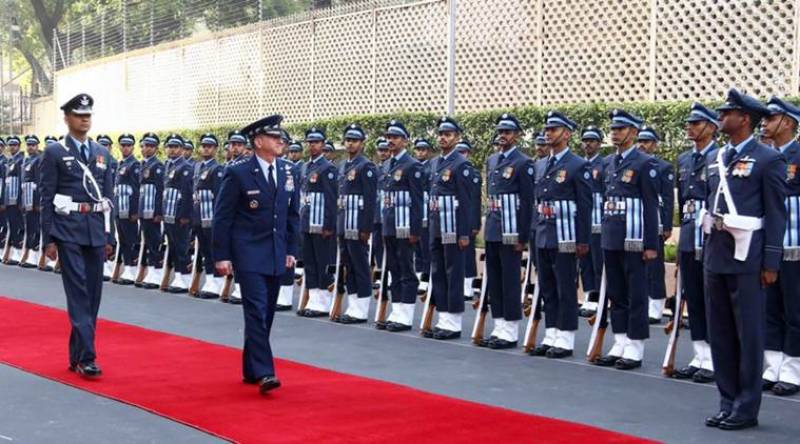 NEW DELHI - Chief of US Air Force General David L Goldfein has said Indian and US air forces will significantly ramp up operational cooperation to complement the strategic interests of the two countries in the Indo-Pacific region where China has been expanding its military influence.

Calling India a “central strategic partner” of the US in pursuing common interests in the region, he said two of the world’s largest air forces were going to jointly shift the focus on the Indo-Pacific region and asserted that the rules-based order must be preserved in the critical sea lanes. Goldfein, who held extensive talks with Air Chief Marshal B S Dhanoa and the top brass of the defence set-up during his three-day India visit that ended yesterday, said the “Quadrilateral” coalition among the US, India, Japan and Australia would provide for deeper cooperation between the Indian and American air forces.

Asked if cooperation between the two forces would deepen in the wake of the four countries joining hands with an aim at containing China’s influence in the Indo-Pacific region, he replied, “I do (think so) and that is a big part of my visit and in my discussions here”.

In June Last year, two Lancer heavy strategic bombers of the US Air Force had conducted flights over the South China Sea, sending a clear message to China against its military build-up in the disputed area. Three US aircraft carriers –the USS Nimitz, USS Ronald Reagan <link> and USS Theodore Roosevelt -have also been operating in the Indo-Pacific region. “We have common interests in preserving the rules-based order. So while we look for opportunities for partnerships, it is actually appropriate also for us to be critical for those who are trying to change that in ways that may not benefit the region,” he told PTI in an interview here.

In November, India, the US, Australia and Japan gave shape to the long-pending “Quad” to develop a new strategy to keep the critical sea routes in the Indo-Pacific free of Chinese influence. Referring to the “Quad” or “quadrilateral coalition”, the US Air Force Chief said there was a natural convergence among the four countries to work towards preserving the rules-based order, adding cooperation between Indian and US air forces would increase at several levels. “India is absolutely a central strategic partner in moving forward in our common interests, and where we take this in the future is the purpose of my visit,” he said.

Goldfein, who has 4,200 flying hours under his belt and flew in the Gulf war and in Afghanistan, also talked about India’s place as mentioned in the recently unveiled national defence strategy of the US. “It will be at a number of levels. It is on interoperability, how do we look beyond new platforms and sensors and look more broadly in the longer term,” he said about cooperation between the US and the Indian air forces.

The visit assumes significance as he was accompanied by Terrence O’Shaughnessy, Commander of the US Pacific Air Force.

Goldfein did not give a direct reply when asked if the US would increase its military presence in the South China Sea. “We want to be strategically predictable but operationally unpredictable. I am not going to share with our adversaries what our intentions are. If in fact, we are to increase our presence or decrease our presence, that is something we will do at our time and place of our choosing,” he said. India, US and several other nations have been pressing for freedom of navigation in the disputed South China Sea. The US has been periodically sending naval ships and planes to assert freedom of navigation, much to the chagrin of China.

The US Air Force Chief said connecting capabilities of the two forces will be one of the priority areas to enhance interoperability. Elaborating, he said the focus of the cooperation will be to “make decisions faster than our adversaries and then act in ways that may bring multiple dilemmas at a pace the adversary could never keep up with”. “I believe that’s going to help us to find deterrence in the 21st century. Being able to produce multiple dilemmas means being able to operate simultaneously from all domains. So as we look at our partnership with IAF, the question for me is not perhaps what individual platforms and sensors we can bring but how do we bring increasing connectivity, how do we actually connect our capabilities in ways that allow us to act, to observe or decide and act faster than our adversaries. That is a big idea going forward,” he said.

Goldfein also talked about his and IAF chief Dhanoa’s roles in “combat campaign” in Kosovo and Kargil in 1999. “He was leading in the Kargil campaign and I was involved in the Kosovo campaign. He was developing night tactics as a squadron commander and I was also developing night tactics as a squadron commander… Who would have thought that the two squadron commanders engaged in combats, building similar tactics, grow up to be the chiefs of two of the largest and most professional air forces on the planet,” he said. “Where do we take that. Again we have these relationships built at all levels, I am excited. There is plenty of opportunities,” he added.

US President Donald Trump, in his first prime-time televised address to the nation as commander-in-chief last year, had laid out his South Asia policy saying a “critical part” of it was to further develop the US’s strategic partnership with India. In June 2016, the US had designated India a “Major Defence Partner” intending to elevate defence trade and technology sharing with India to a level commensurate with that of its closest allies and partners. - PTI