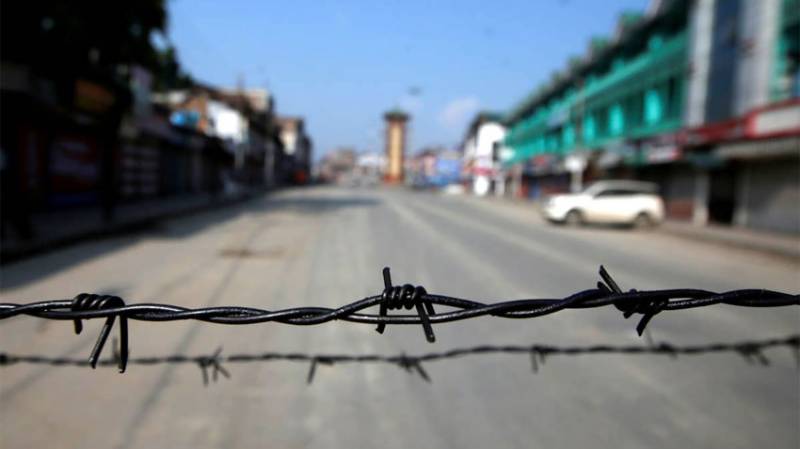 SRINAGAR - In occupied Kashmir, situation continues to remain unchanged in the Kashmir Valley and parts of Jammu region on the 122nd day of military lockdown and siege of the territory.

According to Kashmir Media Service, all shops and business establishments closed and schools and offices without students and staff. Ban on internet has not only ruined the future of students, but it has also rendered jobless 50 per cent businessmen who used to make purchases through digital payments before 5th August.

Indian police arrested over a dozen youth during raids on their houses in Srinagar, Baramulla and Pulwama districts, today (Wednesday).

The youth were arrested on the charges of stone-pelting and staging anti-India protests.

A TADA court in Srinagar extended judicial remand of liberation leader, Abdul Samad Inqilabi, till 17th of this month. He was arrested under draconian law Public Safety Act on December 25, 2018.

A delegation of Jammu-based Muslim community members led by Maulana Shamsi, during a visit to Doda, today (Wednesday), met people from different walks of life.

On other hand, having scrapped the Jammu and Kashmir’s special status, the Modi-led Indian government is now planning to make new regions in the occupied territory by redrawing the existing boundaries of the districts.

Meanwhile, A US journalist, Dexter Filkins, who visited occupied Kashmir in disguise has made terrible revelations about Indian atrocities in the territory.

In an article published in The New Yorker, Dexter Filkins said that Indian Prime Minister Narendra Modi had flooded Kashmir with troops, who detained hundreds of prominent Muslims.

These troops break into the houses at night and subject the inmates to inhuman torture. He said that the troops force the youth to pelt stones on mosques. He said that most of the youth have torture marks on their bodies.

The US journalist warned that the people of Kashmir would erupt in anger against India the day curfew was lifted from occupied Kashmir.

Dexter Filkins said that Muslims have no future in Kashmir and that Indian media, which toes the line of its government, is spreading lies about Jammu and Kashmir.