Policy of suppression failed to yield anything for India: Gilani
4 Dec, 2018 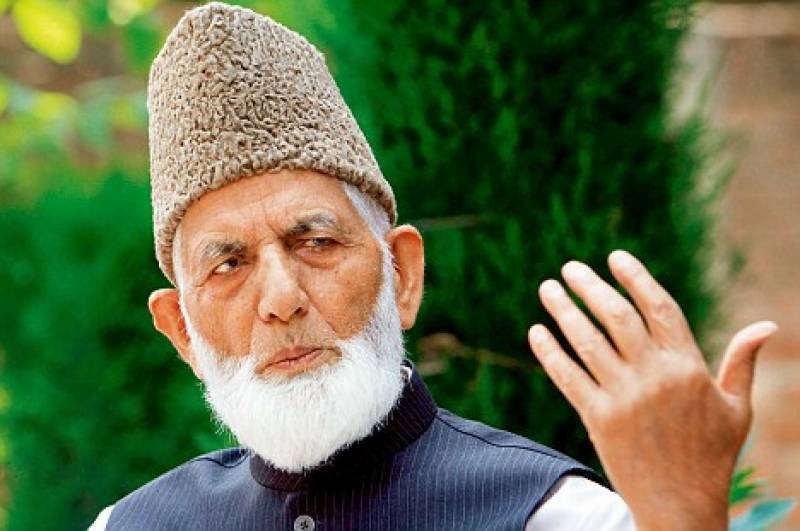 ISLAMABAD: Chairman of All Parties Hurriyat Conference (APHC), Syed Ali Gilani has said that policy of suppression and repression has failed to yield anything for India in Indian occupied Kashmir.

According to Kashmir Media Service, Syed Ali Gilani in his telephonic address to the mourners of the martyr Adnan Ahmad Lone of Bandna, said through the elongated period of ordeal and barbarism since 1947, India was currently facing a powerful people’s political movement for right to self-determination in every nook and corner of the Indian Held Kashmir.

Referring to the sacrifices rendered by people especially youth to end the forced occupation, he said more than 6 lakh people have been martyred and economy worth trillions was lost with the lakhs of injured, but Indian brutality and repression, through their local conduits, seem to have no end.

The APHC chairman said India was suffering from arrogance of power and has tried its best to muzzle our voice, but has utterly failed to do so, and no power on earth particularly the Indian might, its brutality can never deter Kashmiris from their much cherished goal of right to self-determination.

Reiterating appeal for boycott, he said participation in any election sponsored by Indian might amounts to treason and betrayal with martyrs’ blood and disgrace for sacrifices rendered by Kashmiris. “We believe, any election process, India tries to conduct, is nothing but an armed drill to threaten the common people thereby strengthening its illegal control in the occupied land, but we are indebted by the sacrifices and never to even think of any compromise and we pledge to take this sacred movement to its logical conclusion”, he added.

Stressing upon people, in general, and youth, in particular, Syed Ali Gilani said that the Indian brute force would come to an end and the people of Kashmir will, Insha Allah, get rid of the military occupation.